The top sales spot for plug-in electric cars in the U.S. is once again held by the Tesla Model 3.

For the month of May, it was no contest.

The Model 3 simply blew any would-be competitors away this past month with sales estimated at 6,250 in the U.S. That blows away April's result of 3,875 Model 3s sold.

***Update: Well, if you had any doubts about our Tesla Model 3 delivery number, the automaker has all but confirmed that 6,250 is nearly spot on. While Tesla's charts aren't exact, do a bit of quick math - and depending on how you calculate the percentages - you should come to a number between 6,100 and 6,300 for the month of May. Pretty nifty!

Model 3 is now the best-selling mid-sized premium sedan in the USA pic.twitter.com/xI7LsgRI6D 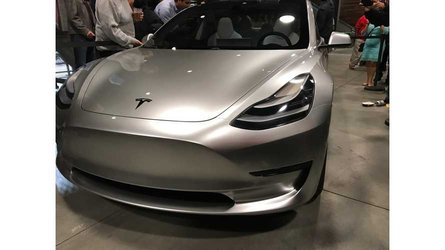 We estimate sales of the Model S at 1,520 for the month of May, while the Model X trails just barely with an estimated 1,450 sold last month.

Combined, Tesla sold an estimated 9,220, which of course puts the automaker in the number one sales spot for the month too.

Back to the Model 3...we suspect that when the month's final sales numbers are reported, the Model 3 will have outsold the next closest plug-in electric car by a ratio of well over 2 to 1.

Lastly, Tesla started delivering some Model 3 in Canada in May too. While we don't have estimates for Canadian Model 3 sales, we can confidently say that those units upped the total monthly ante by hundreds, if not more.