VDL To Deliver 40 Electric Buses To Unibuss AS of Norway 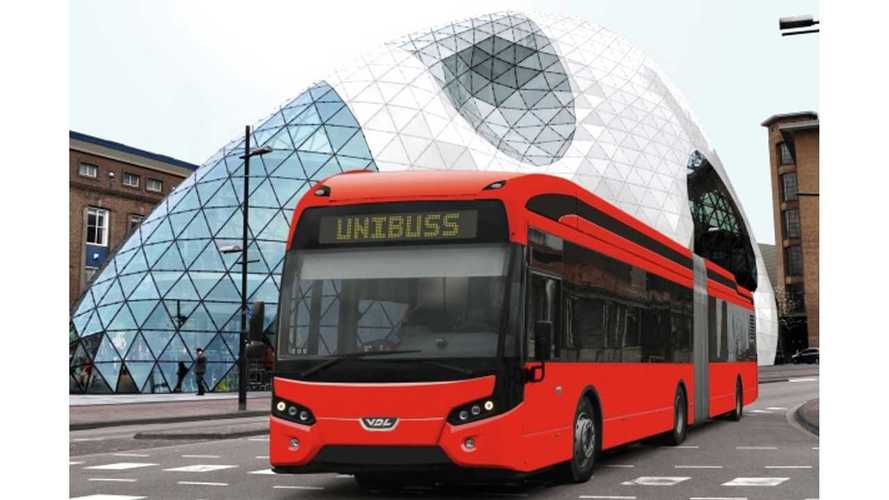 Norway, the electric car capital of the world, finally is getting electric buses in volume.

In May, Dutch VDL Bus & Coach received an order for 40 electric buses from Norwegian company Unibuss AS.

30 of those are to be articulated Citeas SLFA-180 Electric and 10 are Citeas SLF-120 Electric. The buses are equipped with small battery packs of 169 kWh and 127 kWh respectively, because they will rely on fast charging.

The first buses will be delivered by the end of this year, with the rest coming in 2019.

"This order marks the definitive breakthrough of VDL Bus & Coach in the Norwegian public transport market. For VDL, European market leader in E-Mobility, it is also the largest order for electric buses in Scandinavia to date."

“As experienced transition partner and European market leader in the area of E-Mobility, we are pleased to now be entering the Norwegian market. Norway is taking big steps and leading the way in Scandinavia when it comes to the transition to zero emission public transport. We at VDL Bus & Coach are proud that with this prestigious order we are contributing to Oslo's standing as European Green Capital of 2019.”

May was especially fruitful for the VDL as 25 Citeas SLFA-180 Electric were ordered in Sweden.

Oslo on its way to a cleaner environment

On 12 April 2018, PTA Ruter, responsible for public transport in and around Oslo, announced the intention to transition to electric public transport in order to improve quality of life in the city. With the order for 40 VDL Citeas Electric by Unibuss AS, VDL Bus & Coach will play a major role in achieving this goal. This is also fully in keeping with Oslo being chosen as European Green Capital of 2019. Oslo's ambition is for all of the city's public transport to be emission-free in ten years’ time.

“Oslo is the European Green Capital for 2019, and as a public transportation company we have a huge responsibility to make our city even more environmentally friendly. These 40 electric buses take us a large step in the direction of an even greener capital putting the people first. We are pleased to have such an experienced transition partner and supplier as VDL Bus & Coach by our side in this transformation, says Øystein Svendsen, CEO of Unibuss.

Two versions of the Citea Electric

Unibuss has ordered two different versions of the VDL Citea Electric. The 30 Citeas SLFA-180 Electric, with 169 kWh battery pack, will operate on routes 20, 21, 28, 34, 37 and 54 in the centre of Oslo. The Citeas SLF-120 Electric, with 127 kWh battery pack, will run on route 74 between Mortensrud in the South and Vika in the city centre of Oslo. The Citea SLF and SLFA Electric are known for the modular concept, which allows the buses to be built to accommodate various groups of passengers and local requirement packages. This also results in low operational costs and optimal ‘Profit of Ownership’. The quiet, clean e-buses will also contribute to a healthier living environment and improved quality of life for the residents.