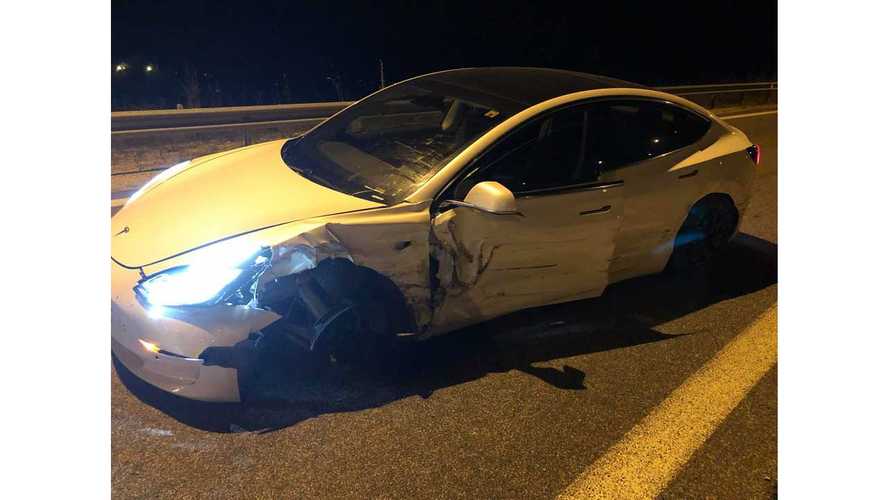 We're not yet sure where to place blame, but it seems Autopilot, lack of driver attention and possible ball bearing failure from a few earlier off-road excursions - which You You knew may have large consequences - could each be the culprit here.

The famous Tesla Model 3 Road Trip has come to a screeching halt as the car hit a barrier while in Europe. It may be awhile before we have any idea of the full details surrounding this latest crash. However, while You You initially appeared to blame Autopilot, he later blamed himself. Now, he's trying to figure out if it may have been some failure related to the suspension.

As you can see by following the story links to the Tesla Model 3 Road Trip Facebook page (above), he's taken the car off-roading in Europe and on some rough roads. On one of the rough-road excursions, he noted that it may lead to large consequences. You You also reported clicking and clacking sounds coming from the suspension on May 20, but never had the car inspected or fixed.

Again, until there's some investigation, we won't be able to form an opinion here. Nonetheless, as has been pointed out on numerous occasions, Autopilot is a hands-on system and the driver is expected to pay attention. In addition to this, the Model 3 is not an off-road vehicle, and if you hear irregular sounds coming from any car's suspension, it's critical to get them looked at and taken care of promptly.

Driver You You Xue, whom we caught up with at an earlier date, has released this statement on the matter:

Re: Model 3 crash on Autopilot

Thank you everyone for your kind wishes and messages of support following the collision late yesterday night. This is an absolutely devastating loss for me and brings a great journey to a sudden end.

I was driving southbound on highway E65 near the city of Florina, Greece. I was headed towards Kozani, Greece, where I planned to charge and spend the night. At this time, I was not tired after having 8 hours of sleep the previous night. I engaged Autopilot upon entering the highway after crossing the border between Macedonia (FYROM) and Greece. My Autopilot maximum speed was set at approximately 120 km/h, the speed limit for this highway. The highway was well-marked, well-maintained, and well-lit. The conditions were dry, and there was no traffic around me. The highway was two lanes in each direction, separated by a concrete median. The highway in my direction of travel divided at a fork, with the #2 right lane changing into the exit lane, and the #1 left lane remaining the lane for thru traffic. I was travelling in the #1 lane.

My left hand was grasping the bottom of the steering wheel during the drive, my right hand was resting on my lap. The vehicle showed no signs of difficulty following the road up until this fork. As the gore point began, approximately 8m before the crash barrier and end of the fork, my Model 3 veered suddenly and with great force to the right. I was taking a glance at the navigation on my phone, and was not paying full attention to the road. I was startled by the sudden change in direction of the car, and I attempted to apply additional grip onto the steering wheel in an attempt to correct the steering. This input was too late and although I was only a few inches from clearing the crash barrier, the front left of the vehicle near the wheel well crashed into the right edge of the barrier, resulting in severe damage.

I was not harmed in the collision, and no medical attention has been sought. I was wearing my seatbelt before and during the collision. None of the airbags deployed.

My Model 3 is not drivable as the front left wheel is completely shattered, and the axle is out of alignment. The damage is severe on the left of the front bumper, running to the front lip of the driver’s door, and is moderately severe from there to the left of the back bumper. The vehicle has been towed to a shop, and at 09:00 today, I will accompany the vehicle on a tow truck to Thessaloniki. I am towing the car there under recommendation from locals as more resources are available there, including resources to repatriate the vehicle back to the United States. I will make a decision soon as to whether or not it makes sense to bring this car back to the United States in an attempt to fix it, as the cost to repair the vehicle may substantially exceed its value after repair or salvage value.

Tesla states in an on-screen warning that both hands should be on the wheel when Autopilot is activated. Furthermore, Tesla states that drivers should be paying attention and monitoring the performance of Autopilot at all times. It is likely true that if all drivers obeyed the warnings surrounding this software, that most of the collisions we hear about in the press would never happen. Autopilot has limitations that currently can only be overcome through human intervention. For example, it cannot detect stationary objects, which explains collisions where Model S has rear-ended stationary vehicles parked on the side of the road.

By looking at my navigation and by not having both hands on the wheel, I was not paying full attention to the road while the vehicle was in Autopilot and was not following Tesla’s directions in regards to the correct use of the software. I want to make it clear that I take responsibility in regards to my actions. With that being said, I do not believe that there are many Tesla owners who, when using Autopilot, always keep both hands on the wheel and provide their undivided attention to monitoring the road and the software. This collision was directly caused by the Autopilot software seriously malfunctioning and misinterpreting the road. This collision could have happened to anyone who does not expect a car travelling at a fast speed in a straight line to suddenly and without warning, veer off course. After tens of thousands of kilometres worth of Autopilot driving without major incidents, I have learned to trust the software. Autopilot provides users with a strong sense of security and reliability as it takes you to your destination and navigates traffic on your behalf. Clearly, I had become too trusting of the software.

Autopilot is marketed as a driver assistance feature that reduces stress and improves safety. However, the vigilance required to use the software, such as keeping both hands on the wheel and constantly monitoring the system for malfunctions or abnormal behaviour, arguably requires significantly more attention than just driving the vehicle normally without use of Autopilot. Furthermore, I believe that if Autopilot even has the small potential of misreading a clearly marked gore point, and has the potential to drive into a gore point and crash into a barrier, it should not be tested in beta, on the open road, and by normal consumers. My experience is not unique as many drivers have reported similar behaviour from Autopilot, and a fatal crash involving Autopilot on a Model X may have been caused by a disturbingly similar malfunction.

Many Tesla fans will likely dismiss this as fully my fault, but I implore those who believe so to take a full step back and put themselves in my shoes, as a driver who had used this amazing software for so long, and who could not have anticipated such a sudden and violent jerk of the wheel to one direction while travelling at a fast speed. I hope that my fellow owners will be less dismissive of various incidents regarding Autopilot, and understand that the general public views these severe collisions differently from the owner community. Tesla is moving quickly into the mass market, and potential customers in that segment aren’t going to ask, “why were both of his hands not on the wheel while the car was in Autopilot?”, rather, they are going to ask “why did the car swerve into the gore point without warning?”. The autonomous driving movement as well as the Tesla community can only get stronger when we tackle these questions and resolve the issues behind them.

I love my Teslas and I have owned a Tesla since 2014. I am upset with myself for being part of the growing list of individuals who have been involved in collisions while their Tesla was on Autopilot. I strongly believe in the capability of self-driving vehicles to not only eliminate all collisions on the road but to revolutionise our society. However, malfunctions like this greatly reduce the public’s confidence in a technology that should indeed be tested and rolled out to the public as soon as it is safe for use. I do not want to cause Tesla damage to its brand or image as I wholly support its mission and I am a big supporter. I only hope that Tesla will investigate this incident to determine what went wrong with the software, and make improvements that will enhance other people’s experiences with the car.

I am very grateful to be alive after what could have easily been a fatal collision. This incident was not more severe thanks to an excellent crash barrier on the Greek highway. I want to thank everyone again for your messages of support. I am honoured to have had this opportunity to spread the EV movement not only around my country but around the world. In closing, I want to address some of my critics who have used this collision to laugh at me or to otherwise make fun of this incident. On this road trip, there have indeed been crazy posts where I push the limit of my car and I have only done these things to share my excitement about my Model 3 with others. Please understand that there was nothing out of the ordinary occurring before this collision. I was not sleeping at the wheel, I was not tired, I was not eating at the wheel (which by the way, I have not done before), no videos were being filmed - the vehicle was being operated normally. I am truly sorry and deeply regret that some of my actions have caused a bad taste in people’s mouths, I ask those people to judge my road trip thus far as a whole and not by my craziest or worst moments. I have met with over 8000 people on the road in three continents and 25 countries, and have demonstrated that not only is it possible to drive an EV across the world, it is absolutely exhilarating and brings along great adventure along the way. I have also seen the potential and power of the EV owners community, which when leveraged, can make a great difference in our world. I ask those who disapprove of my actions to reconsider their stance, and I want to see what positive things can come of this collision.

What happens next on this road trip is uncertain. I will keep everyone posted.

Tesla too issued a statement. It's posted below:

“While we appreciate You You Xue’s effort to spread the word about Model 3, he was informed that Tesla does not yet have a presence in Eastern Europe and that there is no connectivity or service available for vehicles there. In addition, Model 3 has not yet been approved and homologated for driving outside of the U.S. and Canada. Although we haven’t been able to retrieve any data from the vehicle given that the accident occurred in an unsupported area, Tesla has always been clear that the driver must remain responsible for the car at all times when using Autopilot. We’re sorry to hear that this accident occurred, and we’re glad You You is safe.”