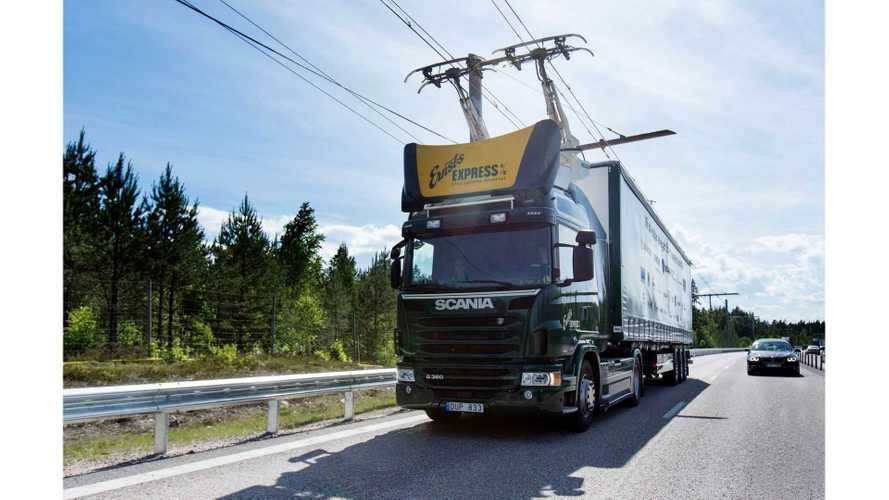 Siemens, together with Volkswagen's subsidiary Scania got the green light for a research project with heavy goods vehicles using overhead power lines on public roads in Germany.

The idea is to enable zero-emissions, long-haul travel by using an overhead catenary system instead of huge battery packs.

Siemens launched a pilot system in Sweden and recently  in California, but the road for a viable commercial product is long and time is ticking away, as battery energy density/costs progress. In the case of this latest project in Germany, it will be subsidized.

Tests will begin in early 2019 with two Scania hybrid trucks:

According to the press release, bigger scale field trials are currently planned.

"The two project partners involved – Siemens and Volkswagen Group Research – are sharing the tasks: Siemens is responsible for developing the pantograph while Volkswagen is providing the required hybrid trucks via the Group's Swedish subsidiary Scania and is carrying out the accompanying research. Trial operations will be conducted jointly as from early 2019.

During the course of this research project, one objective will be to determine how goods traffic can be organised in a more climate-friendly manner, particularly over long distances. This is because in Germany alone heavy goods traffic results in CO2 emissions of 56 million tonnes per year. The extent to which electrification of routes for HGVs can bring about a reduction is to be determined within the scope of this project.

Both Siemens and Scania are already conducting trials on the supply of electrical energy for goods traffic. Now this technology will be gradually coming onto German public roads as part of a research project scheduled to run for three years.

It will involve two Scania trucks with varying degrees of electrification in the hybrid drivetrain taking part in test drives on three different trial routes in Germany. From the beginning of 2019, the first vehicle will be travelling periodically in traffic on public roads on sections of the A5 motorway to the south of Frankfurt, then later also on sections of the A1 motorway near Lübeck and on the B442 federal highway near Gaggenau, as soon as the overhead power line infrastructure there is complete. This research project represents the preliminary stage for a real field trial planned on a larger scale."

"We are expecting the project to produce some useful findings on the potential for saving CO2 emissions through electrification and on the required energy demand of the trucks. These findings will then form input for the development of future generations of electric drives and the associated energy management."

"The eHighway system is an economical and sustainable option for decarbonizing road transport. The field trials in Germany are an important step on the way toward realizing these systems. Along with the electrical drive components, the smart pantograph is the key part of the system: It connects the truck to the infrastructure along the highway. An efficiency of more than 80 percent is made possible by the efficient conductive energy transmission to the truck."

"For long-haulage transportation, Scania sees electric highways as one promising technology for a sustainable transport future. Vehicle electrification is developing quickly and with its environmental, social and cost benefits, it will play an important role in the shift to a fossil-free transport system".