Nissan Reveals LEAF Convertible - It Sure Is Ugly 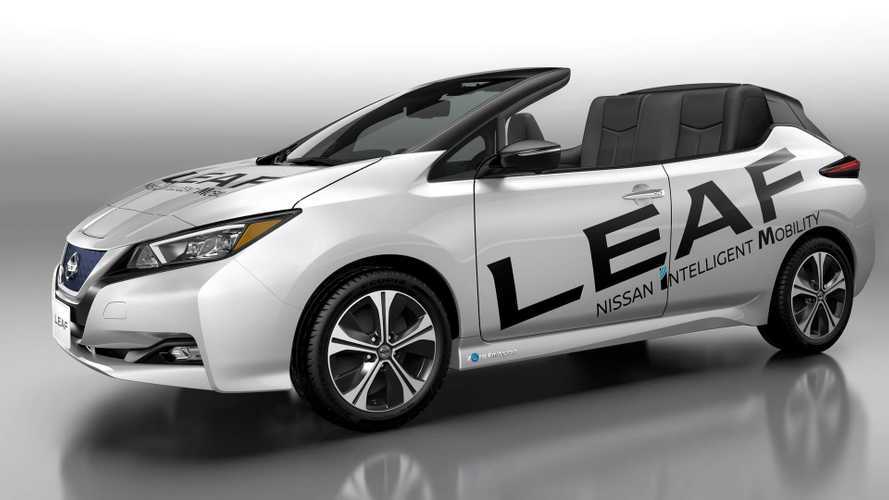 Thankfully, it will remain purely as a one-off affair.

Well, it’s safe to say no one saw this coming. As real as yesterday’s weird Honda Civic Type R Pickup Truck, the Nissan Leaf Open Car is what happens when you take the electric five-door hatchback and chop off its roof along with the rear doors. Why in the world would Nissan do such a thing? To celebrate a pretty important sales milestone at home in Japan where deliveries of the pure electric hatch have reached the nice round number of 100,000.

Brought to you by the same company behind the hugely controversial Murano CrossCabriolet, the droptop Leaf made its debut today in Tokyo where approximately 100 people got together to talk about setting up a “zero-emissions society.” Nissan is being coy on details regarding the targa-styled roof (if it even has one) and about the other changes the hatchback has gone through to become a topless EV.

Aside from being a production hatchback and a conceptual cabriolet, the Leaf is also a sedan (to some extent) when you take into account China is getting a Sylphy Zero Emissions with the Leaf’s guts. It was unveiled exactly a month ago at the Beijing Motor Show as Nissan’s first electric car made in China for China.

Sooner or later, the Leaf will also have a crossover counterpart in the form of a road-going version of the IMx Kuro concept. An exact date hasn’t been provided by the company regarding the model’s market launch, but we do know it will be out “in a few years.”

TOKYO (May 25, 2018) – Nissan showed the Nissan LEAF Open Car, an open-air version of the new Nissan LEAF, in Tokyo today.

The 100% electric car was displayed at a forum to celebrate the milestone of 100,000 sales of the Nissan LEAF in Japan since the model was first introduced in 2010.

About 100 people, including local and prefectural government officials and company executives, participated in the forum to discuss the creation of a “zero-emission society.”

The new generation of the Nissan LEAF debuted in October 2017, featuring improved range and advanced Nissan Intelligent Mobility technologies such as e-Pedal, the ProPILOT driver assistance system and ProPILOT Park. There are currently no production plans for the LEAF Open Car.