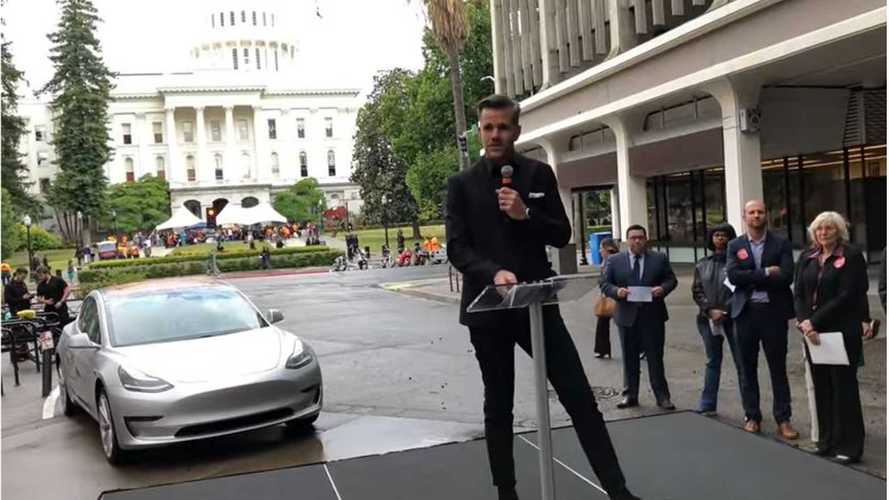 Tesla's goal to push other automakers and companies more rapidly toward investing in a cleaner planet is not new news. Moreover, based on the current situation, it's working (albeit very slowly). Regardless of what others choose, Franz promises that Tesla is committed to assuring that California reaches its lofty goal of five million ZEVs on its roads by 2030.

In California, ZEVs Placed Among Top 5 In Sales In 4 Vehicle Segments

The recent speech was reported by Teslarati as recorded and added to YouTube by My Tesla Adventure. It also features the Tesla Model 3, as well as an invitation from Franz to head to Fremont and meet Tesla's employees. My Tesla Adventure's Eli asked if next Tuesday would be a good day to do so, and Franz responded, "Come on down."

Below is a transcript of part of the designer's speech, as shared by Teslarati:

Sustainable is at the heart of everything that we do, so we want to thank you for your support. We also want to thank the governor for his vision on climate change and clean air policy. The governor’s goal of 5 million zero-emission vehicles in California on the roads by 2030, it’s not only achievable, we’re (Tesla) gonna to help make that happen – day by day – and if we build on these successful policies and programs adopted by the legislature in this administration, we can achieve that sooner than 2030.

Franz Von Holzhausen (Tesla's Chief Designer) appeared at the State Capital to talk about California's mission to put 5 million zero-emission vehicles on the road by 2030, and Tesla's alignment with their mission to push the World to sustainable energy and zero emissions transportation. The Tesla Model 3 will be key to California meeting their 2030 zero emission vehicle goals.