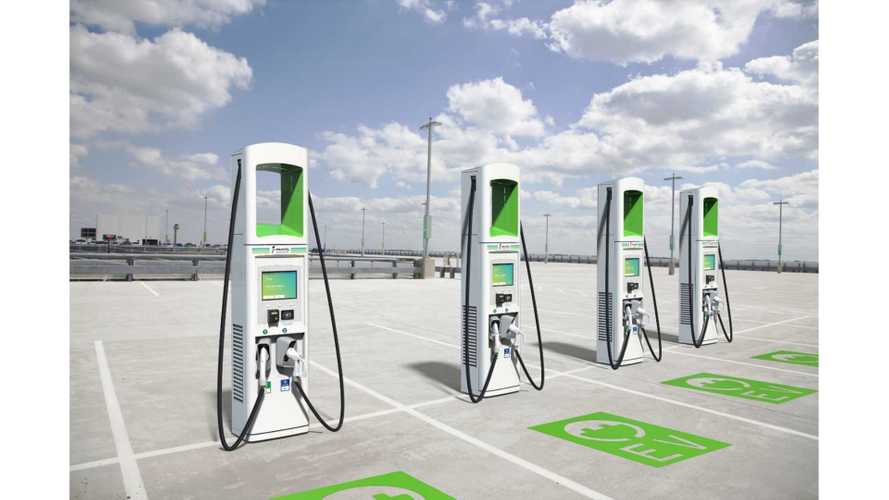 Electrify America, the entity created by Volkswagen to fulfill the requirements of the U.S. Federal court settlement as punishment for the diesel-cheating scandal, will be installing the first ultra-high-speed DC Fast charge station in their network this Wednesday, in Chicopee, Massachusetts.

The Chicopee Marketplace will be, as Electrify America states: "The first-ever certified cooled-cable 350 kilowatt (kW) charger in the United States". Ultra-high-speed DC Fast chargers require liquid-cooled cables to prevent overheating from the intense amount of power flowing through them.

Electrify America claims these stations will have the ability to charge electric vehicles at a rate of up to 20 miles per minute. While still not quite as fast as ICE refueling, it is getting the speed of EV charging very close and minimizing the inconvenience of charging times while on long-distance trips.

These stations are part of Electrify America's "Cycle One", which under the settlement guidelines requires EA to invest $500 million to install, or have under development EV charging infrastructure at US highway, retail, workplace, multi-unit dwellings (MUDs), and other locations by June 2019.

To celebrate the event, Chicopee Mayor Richard Kos will be on hand, as well as other Massachusetts State Representatives and Electrify America reps. We've posted the event details below in case you're in the area and would like to witness this historic event in person.