Turns Out That Salvaged Tesla Might Not Have A Battery Pack 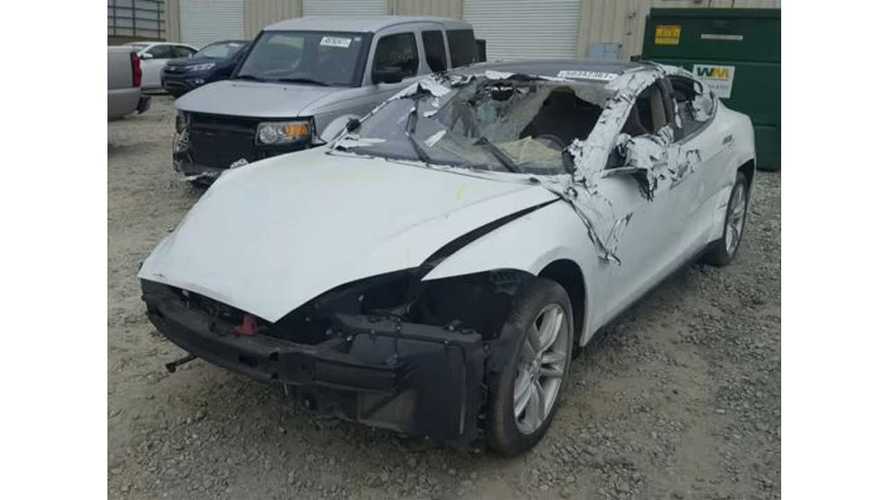 It's a very good idea to make sure that if you buy a Tesla at auction, it isn't missing its ~$16,500 battery pack.

So, how does one easily find out if the battery pack has been yanked prior to the sale?

YouTuber Samcrac recently spoke with Nick, creator of an auto auction site. Nick pointed out that he recently spotted a Tesla Model S being sold at a salvage auction without its battery pack. In fact, he's now seen at least seven examples of this type of business. Of course, this would be fine if the information was divulged ahead of time, but unfortunately, that's not been the case.

Nick found some peculiarities with several salvaged Tesla vehicles on the auction block in terms of pricing, details, and turnaround. He also noticed that some of the cars seemed to be sitting way too high off the ground compared to a new Tesla Model S. These observations convinced him to make some calls to buyers to find out if there was anything strange happening.

Needless to say, Nick discovered that these buyers had received their vehicles only to find out that the battery had been removed without mention. Apparently, at insurance auctions, third-party buyers and sellers are grabbing up these vehicles, removing the batteries and then reselling them (albeit for a significantly lower price, but still without indication of such, and surely not ~$16,500 less).

Samcrac reached out to Rich from Rich Rebuilds to glean a little information related to the situation and teach us exactly what to look out for. If you're not familiar, Rich Rebuilds is a YouTube Channel focusing on rebuilding salvaged Tesla vehicles, along with some other fun, Tesla-related content.

Anyhow, Rich has seen this type of situation himself and says that if you can get an opportunity to push the car, you'll know right that it's not heavy enough. Also, tapping on the underside of the car will sound hollow. He also agrees with Nick's observation that the car may be sitting unusually high, but this is not necessarily the best indicator. Finally, Rich also points out that you shouldn't be fooled by the fact that many of these cars still have a working instrument cluster and touch-screen interface.

People remove the modules but put the case back so it appears to have a battery. They may be able to pull off such a task in under an hour, and then they sell them on sites like eBay for a nice chunk of change. Rich says that people are also removing the rear drive units and making it look as if it's still in the car. Many other parts can also be removed, but it requires more work and the return may not be worth it since the parts aren't as valuable.

If you're buying an EV at auction - especially a Tesla vehicle - be very wary and do your homework.