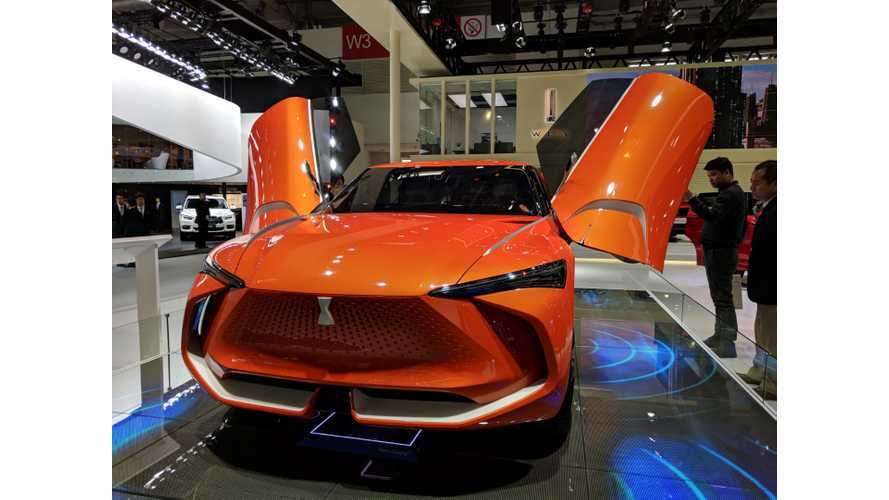 Wireless is the WEY to go!

WEY, the luxury brand of Chinese automaker Great Wall Motors, is at the Beijing Motor Show debuting the WEY-X, an electric crossover. The four-seater is meant to showcase some of the technology the company hopes to have in its vehicles in the near future, and is styled to stand out from the vast number of other compact SUVs on display. In that regard the design is certainly successful.

Looks aside, the technology being touted for the vehicle is worth examining, First of all, and made more noticeable because it's represented by a physical object, is the nod to wireless charging. Between the front wheels on the floor is positioned a Matrix Charging unit from Easelink which, according to that company's website, says it can charge with 99 percent efficiency while pumping the energy in at as much as 22 kW AC (dependent on the speed on your onboard charger, of course), or 43 kW DC. Interestingly, wireless charging was also present on the outfit's previous electric crossover concept, the WEY XEV, presented last year at the Frankfurt Motor Show.

Like so many concepts shown today, autonomy is a big part of the conversation, and in that regard this X is no different. According to GoAuto, it is equipped for level 5 autonomy, which means it can pretty much do all your driving, though it stills has human controls to add that personal touch to your driving experience. To help with that and increase safety, we're told it also features both vehicle-to-vehicle (V2V) and vehicle-to-infrastructure (V2I) communication capability.

Though it hasn't been remarked upon by other outlets, it may also feature its own drone. At least, it has one in the, robot-infested-dystopian future portrayed in the mini-film WEY has released (below) with the concept. In it, the WEY-X also seems to have some sort of flying ability, so don't quote us on that drone thing.

It goes without saying that we'll never see this beast unleashed on our streets (whew!). Still, the company, which currently offers three models in China, does have America in mind for its future, and could soon make its WEY to our shores.