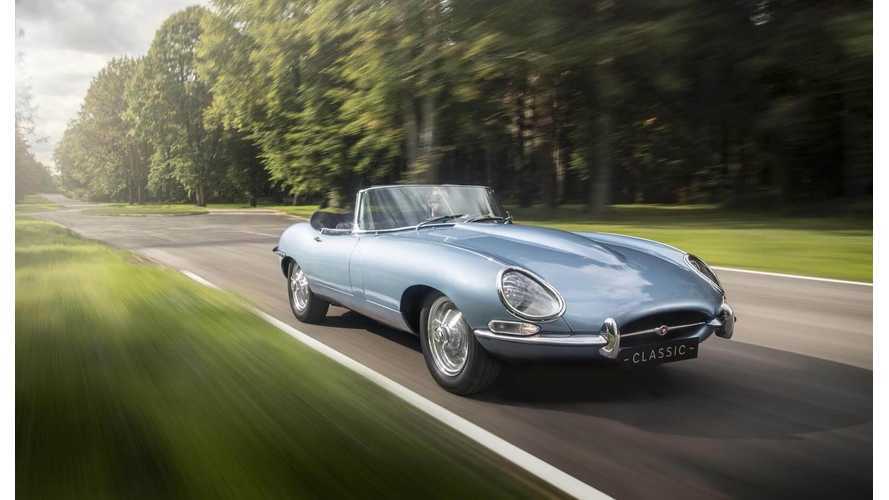 The Royal wedding car that Prince Harry and Meghan left Windsor Castle in today was Jaguar Classic's all-electric E-type, first revealed in 2017 at its Tech Fest event in London, amidst a promise that all its production vehicles will be electric by 2020.

The E-type Zero is based on a 1968 Series 1½ E-type, which at some point in its life had been fitted with an American V8 engine. It was restored and converted to electric power at JLR Classic’s new 14,000m sq headquarters in Coventry. Prince Harry drove it away from Windsor Castle for an evening reception at nearby Frogmore House.

By placing the lithium-ion battery where the famous six-cylinder XK engine once sat, and the 220kW electric motor and reduction gear directly behind it – in place of the four-speed gearbox – the E-type Zero retains virtually the same weight distribution as the original – although the Zero is actually 100lb, or 45kg, lighter which should ensure near identical handling. A new propshaft connects the electric powertrain to the original differential and final drive.

Performance improves upon the original 246bhp model, with a 0-60mph time of 5.5 seconds, a second faster. Although with the same aerodynamics and final drive, top speed would be similar were it not for JLR limiting it to 100mph. However, it reaches that top speed in 10 seconds, a full six seconds faster than the original’s 0-100 time.

What’s important to note is that the battery and new powertrain are slotted into the spaces previously occupied by original engine and gearbox. Indeed, the Zero’s bodywork and interior is unchanged except for LED headlights (for improved energy efficiency) and revised instruments and dashboard.

Also, an XK-shaped electric powertrain could also be fitted to any other Jaguar originally fitted with the XK engine; so XK120, XK140, XK150, XJ6, Mk2, MkXI, S-type, 420, Daimler Double Six and even the Daimler DS420 in which the XK engine lived on until 1992.

JLR Classic director Tim Hannig says, ‘This unique combination creates a breathtaking driving sensation. We’re looking forward to the reaction of our clients as we investigate bringing this concept to market.’

The Zero uses technology developed for the new Jaguar I-Pace, which goes on sale in 2018. Jaguar had stated that the decision on whether or not the Zero will go into (very) low-volume production will depend entirely on customer interest. We suspect customer interest has just soared! You can see more on the Jaguar Land Rover Classic Works website.