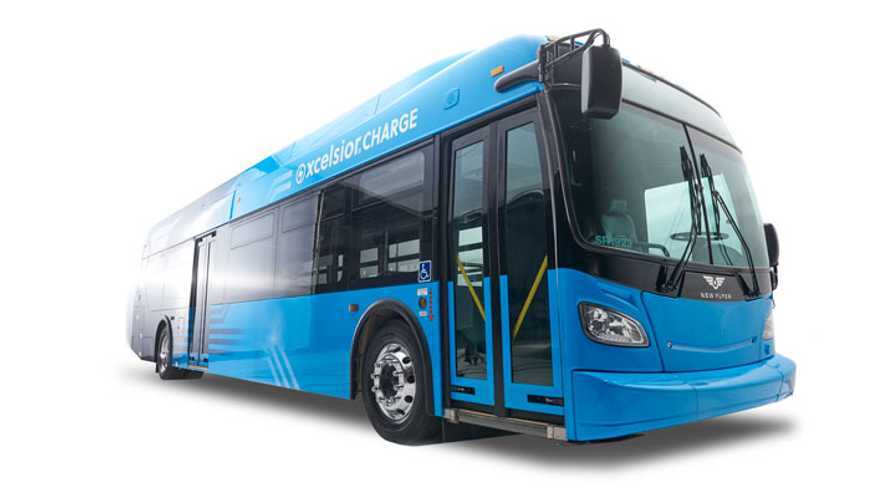 San Francisco commits to electrify its entire bus fleet by 2035.

The San Francisco Municipal Transportation Agency (SFMTA) intends to begin a pilot project next year to evaluate how all-electric buses perform on crowded and hilly routes.

Then purchases will begin. From 2025, new bus orders will be only for all-electric models and within 10 years, by 2035, all diesel buses are to be replaced.

There are also other agencies, like SamTrans from San Mateo County that decided on 100% electrification (by 2033).

"Mayor Mark Farrell and the San Francisco Municipal Transportation Agency (SFMTA), which operates Muni, today announced San Francisco’s commitment to have an all-electric bus fleet by 2035. This means that the SFMTA will only purchase all-electric buses starting in 2025 to meet the goal for 2035. An all-electric bus does not use fuel and relies solely on the battery within its operating system."

“San Francisco is proud to once again lead on sustainable initiatives that not only improve our city, but improve the world. This new investment represents a bold shift in how we move hundreds of thousands of people on public transit, while reaffirming San Francisco’s commitment to sustainable energy practices.”

More about the electrification:

“We are excited about the possibility that by 2035 we will be able to provide an all-electric fleet that won’t require overhead wires,” said Cheryl Brinkman, Chairman of the SFMTA Board of Directors. “As an agency, we have always been forward thinkers when it comes to greening our fleet and we will continue to take steps to test electric vehicles here in San Francisco to reach our goal.”

The SFMTA has been rolling out new electric hybrid buses with higher capacity on-board battery systems. The increased on-board battery capacity will allow the SFMTA to run a test program to operate “Green Zones” along several electric hybrid routes that would run only by battery for significant portions of the route. The “Green Zone” signifies an area in which the vehicle will not produce any emissions. The SFMTA is working to identify these zones throughout the city.

“Muni's transit system is the cornerstone of our city's environmentally sustainable transportation system and is one of the greenest in the world,” said Ed Reiskin, SFMTA’s Director of Transportation. “Our efforts to take our fleet to the next level won’t only make for better and more efficient service, but they will continue the work we are doing to be one of the cleanest fleets in the country and improve rider experience.”

The SFMTA is at the ready to move forward with electric bus technology when manufacturers can prove their electric buses can withstand heavy ridership and steep hills. The agency would also have to consider new facilities that can charge a large fleet and developing a systemwide infrastructure to charge vehicles in service or on the street. John Haley, SFMTA’s Transit Director said, “While the battery technology is emerging rapidly, it isn’t quite ready for primetime. Manufacturers aren’t yet producing the number of all-electric buses San Francisco and other urban areas would need, nor could we guarantee that the vehicles would work for the required 15 years with heavy ridership and challenging topography.”

In 2019, the SFMTA intends to purchase a limited number of zero-emission battery electric buses and test them in service throughout San Francisco to evaluate how they perform on crowded and hilly routes. The most important step to support the zero-emission goal is to determine the infrastructure needs for electric buses, including upgrades for our existing facilities to accommodate charging requirements and maintenance.

Of the nearly 900 all-electric buses purchased across the country, only 207 are actually in service. By contrast, Muni is currently operating 250 electric trolley vehicles.

Over 50 percent of the transit fleet, including light rail, cable cars, historic streetcars and electric trolley buses are largely powered by greenhouse gas-free hydropower generated from Hetch Hetchy. Beyond that, our new electric hybrid buses use 100 percent renewable fuel. This eliminates greenhouse gas emissions and petroleum fuel and saves a million gallons of fuel each year. San Francisco’s transportation sector generates approximately 46 percent of the City’s total greenhouse gas emissions mostly generated by the use of private cars and commercial trucks. By contrast, Muni carries 26 percent of all trips in the city, but accounts for less than two percent of these emissions.

On April 19, 2018, in celebration of Earth Day, Mayor Mark Farrell committed San Francisco to net-zero greenhouse gas emission by 2050, a move that will eliminate the City’s carbon footprint."