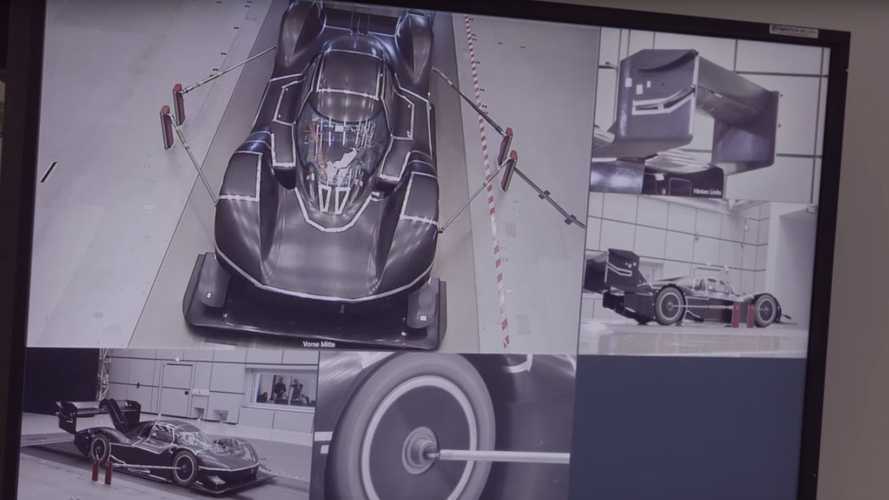 Given the size of the wing, this beast should have no problem producing downforce.

Volkswagen is preparing the I.D. R for its competition debut at the Pikes Peak International Hill Climb on June 24. In a new video, the company shows off the process of fine tuning the machine's aerodynamics for the 12.42-mile (19.99-kilometer) course. VW wants to take record for the fastest electric car up the mountain, which is currently 8:57.118, but the team would likely be very happy with beating the Peugeot 208 T16's overall record time of 8:13.878.

The Volkswagen Motorsport crew started with a half-scale model in the wind tunnel. The engineers 3d-printed around 2,000 parts, and the car's construction allowed them to swap out panels quickly. This allowed the team to experiment with various tweaks to the body rather easily. There was a similar process when doing the final tweaks on the full-sized version.

According to VW's engineers, having a vehicle that produces lots of downforce is a major factor in setting a quick time at Pikes Peak because of the course's many curves. The I.D. R certainly checks that box with an absolutely gargantuan rear wing and similarly huge front splitter.

Sufficient power is necessary for beating the current record, too, and the I.D. R has no problems there, either. The vehicle uses a pair of electric motors – one at each axle – for a total of 680 horsepower (500 kilowatts) and 480 pound-feet (650 Newton-meters) of torque. VW claims that this powertrain get get the low-slung, 2,425-pound (1,100-kilogram) race car to 62 miles per hour (100 kilometers per hour) in a lightning quick 2.25 seconds.

VW also has an ace driver taking the I.D. R up Pikes Peak because Romain Dumas is behind the wheel. He has driven to victory three times at the 24 Hours of Le Mans and posted the fastest time at the Pikes Peak International Hill Climb in 2014, 2016, and 2017.