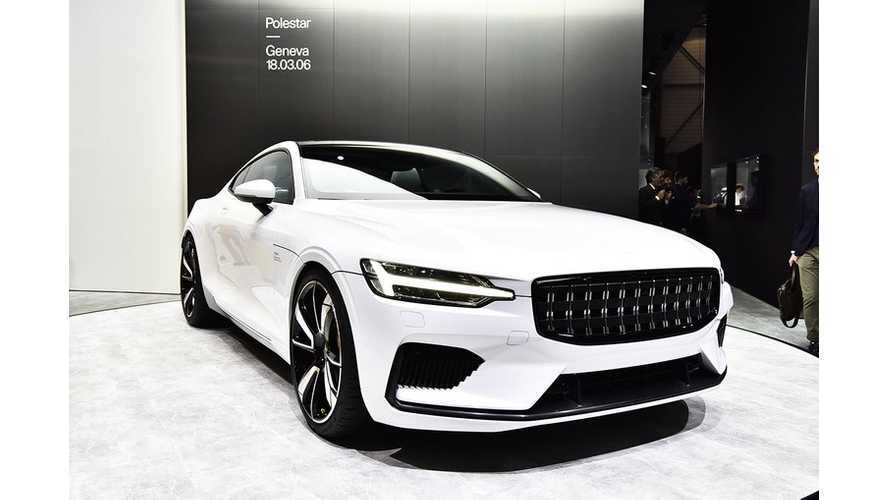 Over 7,000 people have already placed deposits to pre-order the car.

We now know how much it will cost to buy Polestar’s first car, the Polestar 1. The plug-in hybrid coupe will list from $155,000 in the U.S., or €155,000 in Europe. It will still be some time until customers can receive the car, however, as “pre-production testing” at Polestar’s plant in Chengdu, China, will not begin under the end of this year.

The pricing confirmation comes after Polestar already opened pre-orders to prospective customers in 18 countries (several European nations, North America, and China). For a $2,500 or €2,500 refundable deposit, customers could reserve a place on the list to buy the new model. Polestar reports that more than 7,000 people placed those deposits.

The pricing figure places the Polestar 1 firmly in the luxury-car realm, though its lofty price tag was not unexpected. For comparison to other similar cars, note that the Tesla Model S P100D (which is all-electric, not a PHEV) starts from $135,000, while the Porsche Panamera 4 E-Hybrid starts at $99,600.

Polestar also plans to launch a subscription program for the 1, which like the Care By Volvo packages for the new XC40, will likely bundle the car payment, insurance costs, and maintenance into one lump sum.

In addition to the ultra-sleek design we’ve already seen, both when the car was introduced in Geneva and when a recent video showed a prototype testing in the Arctic Circle, the Polestar 1 will have a powerful, advanced drivetrain. A plug-in hybrid, it will feature a turbocharged and supercharged 2.0-liter gasoline engine that powers the front wheels, plus a 34-kilowatt-hour battery pack and two electric motors to drive the rear wheels. It’s expected to return 93 miles (150 kilometers) of all-electric driving range, plus total output ratings of 600 horsepower and 737 pound-feet of torque.

The Polestar 1 will be a 2+2, meaning seating for four, and Polestar describes it as an, “Electric Performance Hybrid GT,” likely signaling that there will be equal focuses on luxury and sportiness from behind the wheel. The car rides on a version of the Scalable Product Architecture platform (SPA) already used for the Volvo XC60, XC90, S90, and V90. And as to handling chops, Polestar has said the 1 will feature Öhlins dampers, Akebono six-pistons front brakes, and 21-inch wheels.

Annual production of the Polestar 1 is rumored to be limited to only about 500 cars, primarily because the process of building the carbon-fiber body and steel chassis is so complicated.

After the launch of the Polestar 1, the new company plans to introduce a more affordable mid-size car, called the 2, in 2019. Positioned to fight the Tesla Model 3, it’s likely to be far more affordable than the Polestar. And after that, the Polestar 3 will launch; it’s slated to be “a stunning electric SUV with a beautiful aerodynamic silhouette.”

The Polestar 1 has debuted at Auto China 2018 in Beijing, marking the return of Polestar to China. Following its media launch in Shanghai in October 2017, and recent European launch at the Geneva Motor Show, this is the first time the Chinese public has the chance to see the Polestar 1, the first car from the new electric performance brand, Polestar.

“After our public introduction at the Geneva Motor Show in March, we are excited to be back in China – one of the key markets for the Polestar brand,” says Thomas Ingenlath, Chief Executive Officer at Polestar. “It feels great to bring the Polestar brand and the Polestar 1 closer to the public here in Beijing.”

Pricing for the Polestar 1 has now been confirmed as 1.45 million RMB in China, 155,000 euros in Europe and $155 000 in the United States, giving customers a clear understanding of where the Polestar 1 sits in the marketplace. Details of Polestar’s all-inclusive subscription pricing will be confirmed at a later date.

In March, pre-orders for the Polestar 1 were opened to over 7,000 people in 18 countries who had expressed interest in owning a Polestar 1, enabling them to pay a deposit as a placeholder in the queue for the car.

“We have seen a strong initial response from our first customers,” continues Thomas Ingenlath. “This gives us confidence that our brand has a bright future. In 2019 already we will launch our next car, the Polestar 2 – a mid-sized fully-electric car which is well developed in its engineering phase. We will follow that up with the Polestar 3, a stunning electric SUV with a beautiful aerodynamic silhouette that is already advanced in its design phase.”

Another key development in Polestar’s global growth was the appointment of August Wu as the new President of Polestar China in March.

“I am delighted to be part of this exciting electrification journey with Polestar as we become an important force in the automotive industry’s evolution in China,” says August Wu.

“We recognise the Chinese market’s potential for electric vehicles, and Polestar has the strength to take advantage of these opportunities. We are committed to China, where we already have a significant footprint, and we are excited to be a brand that can raise the awareness and appeal of electric performance vehicles.”

Polestar began building strong momentum immediately after its launch last October, which was closely followed by the start of construction at the new Polestar Production Centre in Chengdu, China. The dedicated facility now has a completed roof structure and is on track towards tooling installation and pre-production testing by the end of 2018. The Polestar Production Centre will build all Polestar 1 cars for customers around the globe.

August Wu will lead the development of Polestar in China with a focus on the new Polestar retail network – called Polestar Spaces – where customers will enjoy a personal brand experience without the typical sales approach found in traditional car dealerships. However, retail functions like placing an order will be digital, as Polestar also redefines the way customers live and interact with their cars.

“Polestar engagement will be digital and our cars will be offered primarily on a subscription basis. With one monthly payment covering all of the traditional costs associated with car ownership, we enable the customer to focus on the enjoyment of driving. We believe that this will help Polestar form a new relationship between ourselves and our customers,” concludes August Wu.

The Polestar 1 is an Electric Performance Hybrid GT which produces 600 horsepower and 1,000 Nm of torque, as well as 150 km of pure electric driving range – the longest of any hybrid car in the world.