BYTON in Beijing: We Interview Four Of BYTON’s Top Executives 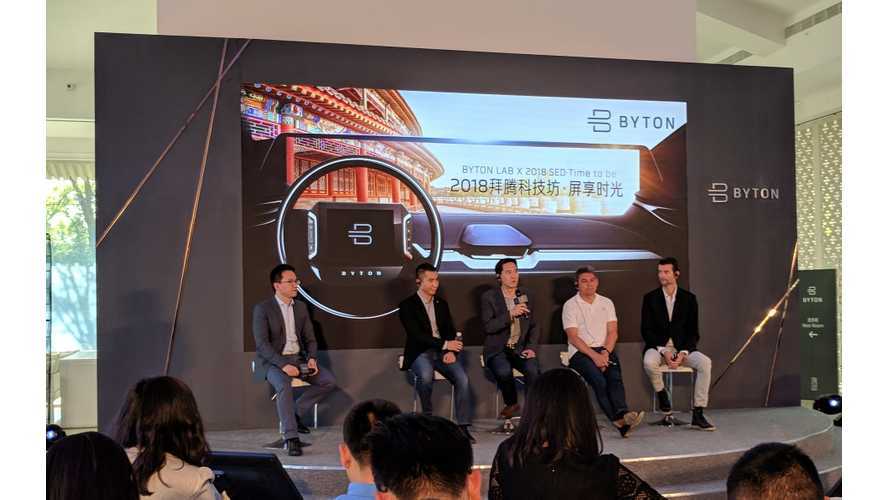 With the recent troubles of once-promising Chinese electric vehicle startups like Faraday Future and Lucid Air, it’s not hard to be a tad skeptical every time the next all-electric, connected autonomous car company based in China is announced. However, BYTON is a bit different and is really beginning to look like they are for real and will indeed bring cars to market.

Watch This: Check Out Exclusive Interview With Byton CEO In Milan

They have an all-star management team, with ex-BMW, Infinity, Renault, Tesla, and Apple talent, they are well funded and have been moving at a breakneck pace towards the projected launch of their first vehicle in late 2019.  That vehicle is an all-electric five-passenger SUV which will have a starting MSRP of $45,000.

It will come standard with rear-wheel drive and a 71 kWh battery but an all-wheel-drive version with a 95 kWh battery will also be available. BYTON also claims it will launch with level 3 autonomy, followed by the availability to upgrade to level 4 in level 5 within a couple years. BYTON doesn’t simply call the vehicle a car, but: “The next generation smart device” because of it’s high level of connectivity, innovative UI and digital experience.

I asked both founders, Daniel Kirchert and Carsten Breitfeld, what drove them to leave their top management positions at established automakers, to start BYTON. They both offered very similar answers and eluded to me that while the large OEMs had near-endless resources, that they lacked the ability to adapt quickly enough to this new evolving market of electrification, autonomous driving, and connected-smart features. They wanted to be part of shaping the future, not waiting for it to come to them. Here are excerpts of how they both answered that question:

Kirchert: “Carsten and I had a very clear vision and the ability to execute it. For us, it was already clear two and a half years ago. Electrification is the future of the industry, it was just a matter of time. Everyone’s doing it (electrification) the big guys aren’t doing it full steam now, not because they can’t, but because they want to do it slowly, not to impact their short-term earnings”

I then asked if Tesla was an inspiration:

“Of course Tesla was an inspiration; but we were actually inspired more by Apple, in fact.”

Breitfeld: “During the development of the i8, (He was the head of BMW’s i8 program) I came to understand what is going to happen in the industry in the next ten years (electrification). But then after finishing the i3 and i8, for whatever reasons I cannot comment and don’t want to comment, BMW stepped back a bit from their electrification. So, my options were to stay at BMW and perhaps oversee the next 7-Series or whatever, but was that really something that would raise my passion? If I do the next traditional car, knowing and seeing that something else is going on in the industry it won’t be satisfying. Then I was approached by a consortium of CEOs of large Chinese companies and asked me if I would be interested in setting up a new company, coming up with the first smart-internet vehicle, and doing it in a short period of time. This was actually the exact idea I had before they approached me, so I accepted.”

I asked Kirchert if the car sacrificed a good driving experience because it was being designed for autonomous drive. Would it be a high-performance car like Tesla produces? Kirchert admitted that BYTON isn’t going to challenge Tesla for the ultimate performance EV, as some of the other electric upstarts have seemed to be trying to do. Instead, BYTON is focusing on affordable luxury.

It’s important to note that the rear-wheel-drive BYTON will have 269 HP, and the all-wheel-drive version will sport a 469 HP electric motor. So even if performance isn’t their primary focus, the cars certainly aren’t underpowered.

I then asked him why not just focus on the Chinese market for a while. The demand will be high and it would simplify production:

“We decided we needed to be a global brand right from the start. Unlike what some of the other guys that have come before us that have planned, a China launch and then maybe go elsewhere in a couple years, we’re going to do a global launch. From the perspective of the consumer, if you really want to earn credibility and build a premium brand, it has to be a global activity.”

“Sure, if you live in Munich and drive to the mountains driving pleasure is important, but if you live in Beijing, or Los Angeles for that matter, it’s not so much about driving fun, as most of the time you’re sitting in traffic at very low speed. So yes, it’s definitely becoming less important. Autonomy, combined with a new user experience which allows you to make better use of your time on the move, this will be the new thing in the future. Our cars can be powerful and fun to drive, but on the other hand, they are prepared for the era of autonomy.”

I then sat down with BYTON’s Vice President of Engineering and asked him if the large 49-inch display would be too much of a distraction for the average driver.

“It’s not really about the size of the screen, it’s more about dynamic images that keep changing. Static images aren’t distracting. So, our design teams have to figure out how in an easy calming way, how to bring up content, without being too distracting.  One way is to make certain content only available in autonomous driving mode, but also with the content that we do show, make it so that it’s not distracting.”

What exactly do you mean about making certain content available in autonomous mode?

“There are rules and regulations that we have to follow, one of them is when you’re driving, you can’t have an active video playing, but in different levels of autonomous driving, you can. There will absolutely be certain features that will be disabled when you’re in manual driving mode, for safety sake.”

Finally, I had some time with BYTON’s Head of Design, Benoit Jacob and I asked him to tell me about how he designed the front grill area. Electric cars don’t need such a large front grill area, yet designers seem hesitant to remove it from their electric car’s design. I asked him how he approached this decision?

“Of course, as an electric car, you need less air for cooling. What comes instead of the air for intake, comes sensors, especially for level 3 or 4 autonomy, you really have to integrate more sensors. They have to be there, some of them you can hide, but some have to be exposed. This is where we see also, the opportunity to offer a different kind of identity. The fact that you have grills and large lights give a sort of expression to the car; the car can engage you. With electric cars without the grill, and smaller lights it’s all gone and the car no longer expresses anything. So, what you have to do is kind of reinvent the idea of a grill. This is what we are doing, we call it smart surfacing where we integrate the sensors, the lights, and air system. This offers a high-tech expression and gives us our identity.”

BYTON provided airfare and lodging for InsideEVs to bring you this Beijing Auto Show report.