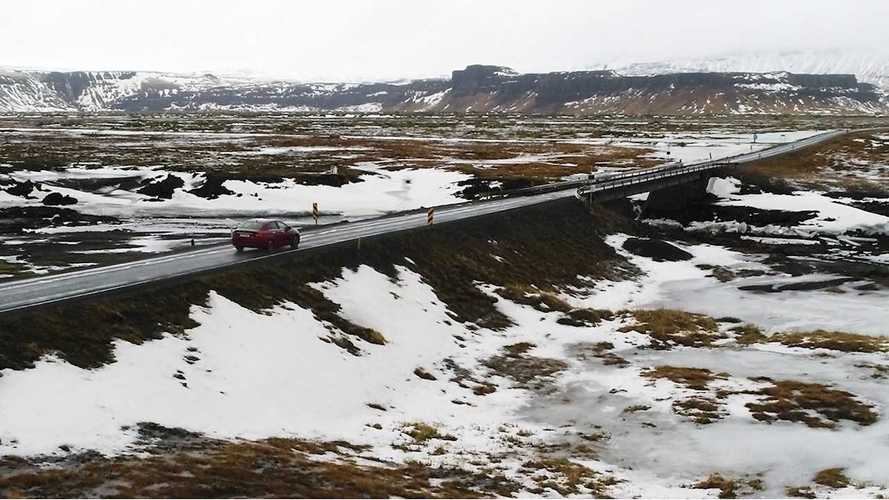 Iceland is one of the most EV friendly places in the world, with some 13% share for plug-in electric cars in 2017 among new sales.

Some 80% of the electricity is generated from renewable sources and the main road that circles the entire island is equipped with more than 20 fast chargers along over 1,300 km (800 miles).

The ABB Terra 53 chargers (50 kW, multi-standard) - managed by the ON Power - need to withstand extreme weather conditions, including temperatures that drop as low as -30C, lots of salt, sea fog, moisture and storms.

To make the chargers more visible, all are orange.

"Iceland is implementing an ambitious plan to increase the adoption of renewable energy, with incentives to promote electric vehicles.

The impetus for Iceland's sustainability push came from the realization that the island nation was overly dependent on foreign oil sources. Today, 80 percent of Iceland’s energy comes from non-fossil resources, led by hydropower and geothermal energy."

"While fossil fuels still account for 20 percent of overall energy usage, the Icelandic government has put in place a state-financed incentive program to increase the use of electric vehicles. It's already having an impact—today there are more than 6,000 e-cars, compared to a scant 90 in 2014.

To power these e-cars, more than 20 ABB fast charging stations have been installed along Iceland's famous Route 1, the 1,300+ kilometer road that's the country's main highway and its logistical backbone.

There, the chargers are exposed to the most extreme weather conditions, including temperatures that drop as low as -30C."

"The ABB fast chargers can top up an e-car battery in just 15-30 minutes. All the ABB chargers support comprehensive solutions for user authorization, payment and network connectivity. A stable charging infrastructure for electric vehicles is crucial if Iceland is to realize its ambition of becoming 100 percent energy sustainable. “In the beginning people were skeptical, but now they see e-vehicles on the road and realize that they are here to stay," Skúlason said.

ABB AbilityTM technology guarantees that the charges are operational 24/7. Remote digital connectivity enables continuous monitoring of the device from any location on the island. This gives ON Power access to data in real time for the remote monitoring and proactive control of the operational and technical status of the charging stations. ABB provides a fully flexible overview of the entire charging network to make sure the system is fully functional right down to temperatures of -35C."

"Cloud-based technology connects the chargers to the Microsoft Azure cloud-based platform to drive greater value and efficiency. This means that technicians can diagnose over 90 percent of all errors and solve over 60 percent of them remotely without having to go to the location, and at the same time, this makes it possible for ON Power to guide their customers in the best possible way."

Bjarni Már Júlíusson, CEO of ON Power, a leading electricity company that's part of Reykjavik Energy. ON Power will operate the network of ABB chargers situated along Route 1 said:

“You will not find a more challenging climate than in Iceland. The chargers are exposed to incredibly harsh weather conditions with lots of salt, sea fog, low temperatures, moisture and storms.”

“ABB is typically able to remotely reboot a charger if there is an error, which is extremely convenient in Iceland, due to the long distances and tough weather involved in sending out service personnel."

“All the chargers are orange, which makes them easier to see when the harsh weather reduces visibility,” .