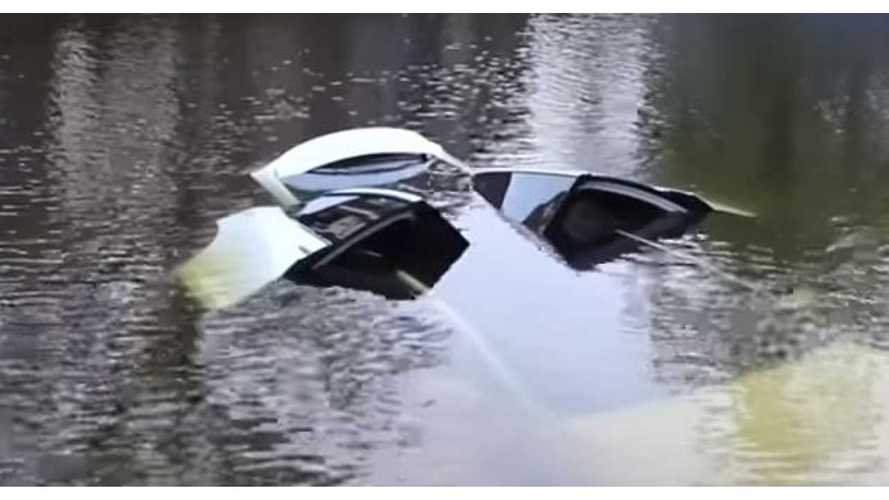 Well, it turns out a Tesla Model X can float for a bit, and once it sinks, you'll be able to easily exit the vehicle.

To be more specific, the Model X does actually float for a brief time, even with the windows down. While it's still floating, the electric SUV's signature Falcon Wing Doors remain closed. But, as you can see, as it begins to go under, the doors automatically open.

Check This Out: Stolen Tesla Model S Found In River With Big Bag Of Onions

It's Like A Boat: Tesla Model S Drives Through Flooded Tunnel

Teslarati first tracked down a video of the aftermath of the incident, which was shared by Flashphoto NL. As the story goes, the Model X somehow "fell" into the Korte Haven canal in Schiedam, Netherlands.

Fortunately, the driver wasn't injured and opted to forego medical attention. The Model X was eventually lifted out of the waterway by a crane.

As we previously reported, when we shared the recent "floating Tesla Model S and a bag of onions" story (linked above), these Tesla vehicles do have a tendency to float, at least for longer than one might expect. The flat, sealed underbody apparently makes the EV a better boat than most typical ICE cars seem to be.

CEO Elon Musk actually went so far as to say in the past that - although he doesn't advise it - the Model S could make a pretty good boat, temporarily. There's no engine to hydrolock, the vehicle will actually propel itself through the water, and the electrical components may fare okay for a brief period of time. You just won't get very far before you sink.

At least if you use your Tesla Model X as a boat (please don't), it will let you out when it sinks.