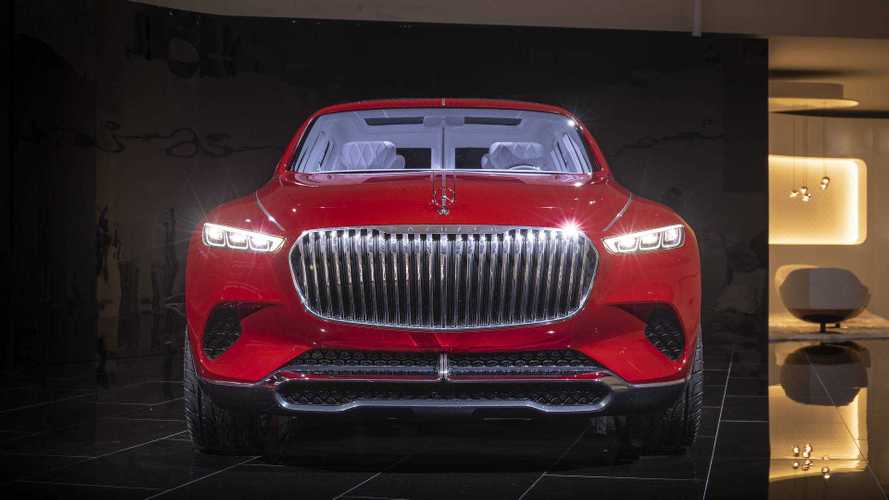 The concept looks like a luxury sedan on stilts and features an opulent cabin that features a hidden tea set.

While a handful of images of its design leaked out recently, Mercedes-Benz has now announced full details about the Vision Mercedes-Maybach Ultimate Luxury concept for the Auto China show in Beijing. The vehicle's designers create an odd shape with the Chinese market specifically in mind by blending the aesthetics of an SUV and a sedan – the two most popular segments for luxury vehicles there.

For power, the Vision Ultimate Luxury features an electric, all-wheel-drive powertrain. The four electric motors produce a total of 738 horsepower (550 kilowatts), and the 80-kilowatt-hour battery allows for an estimated range of over 200 miles (322 kilometers). A fast-charging system would allow for recouping around 60 miles (97 kilometers) in just five minutes.

The vehicle's design is certainly striking, if not necessarily beautiful. In front, the Vision Ultimate Luxury concept features a gigantic chrome grille that immediately grabs attention. Muscular fenders and big intakes in the lower fascia lend the model an aggressive, somewhat sporty look, too.

The design really shows its weirdness in profile, though. The model's proportions make your mind expect to see a luxury SUV, but the tail dips down to create a notchback. The shape makes the look like a sedan with a lifted suspension. The fan-like, multi-spoke wheels don't help the model's aesthetics either because they are reminiscent of the ugly aftermarket pieces that some tuner cars wear.

In another visually intriguing design decision, the Vision Ultimate Luxury features a split that runs from the roof to the tail. This element splits the sunroof into two pieces and cuts up the rear glass, too. Chrome trim draws the eye to this detail, too.

Maybach's clientele buy these lavish vehicles to ride in comfort while a chauffeur handles the driving, and the designers put an emphasis on pampering the rear passengers for this concept. Occupants back there sit in fully adjustable chairs with diamond-stitched Nappa leather in the color Crystal White. There's also lots of rose-gold-colored trim. The expansive center console features a compete tea set, including a heated section underneath the pieces for keeping the drinks warm. An electric cover slides into place after enjoying tea time.

The person driving the Vision Ultimate Luxury gets a pair of 12.3-inch digital displays – one for the instruments and another for infotainment duties. There's even more Crystal White leather up front and a mix of wood and rose gold trim.

The Maybach sub-brand will reportedly offer an SUV in the future, but it likely won't look like this concept's odd blend of SUV and sedan design. Instead, Mercedes will probably use the GLS as the basis for the highly luxurious model.