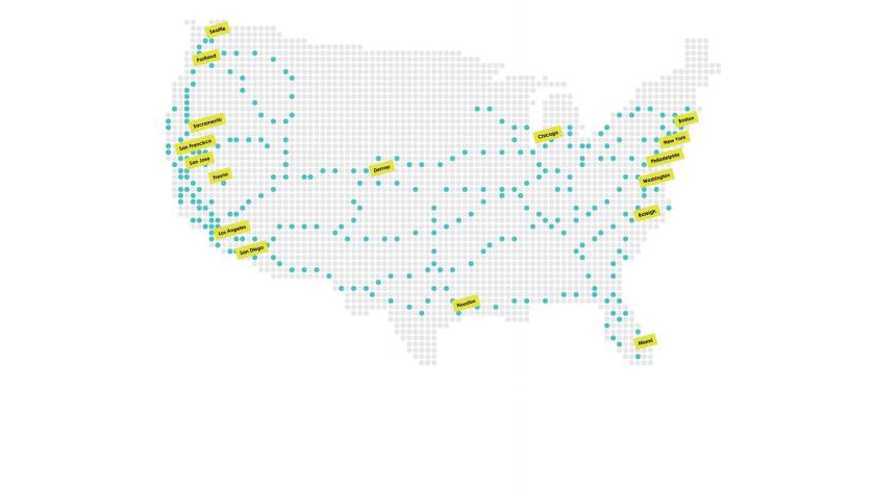 Electrify America announced a set of partners for installations of ultra-fast DC fast chargers at more than 100 major retail, convenience and refueling locations in the U.S.

The latest announcement comes on top of the previous about DC fast chargers (also some ultra-fast) at more than 100 Walmart locations, which in total translates to more than 200 stations at 484 locations planned by the end of 2019.

Each station will be equipped with multiple chargers.

Among the new partners are:

“These partnerships allow for more convenient charging opportunities for EV drivers. We’re purposefully placing our charging stations in locations where people already go, where they are needed, and in places that offer the best customer amenities, such as shopping and food, so that electric vehicle charging is easier and more appealing. We are delighted to partner with these hosts to offer their customers a new on-site service.”

The first ultra-fast charger, certified for 350 kW of power, to be opened on April 25 at Brixmor Property Group’s Chicopee Marketplace, in Chicopee, MA.

"As the first partner to sign with Electrify America to host charging locations, Brixmor Property Group’s Chicopee Marketplace, in Chicopee, MA, will also be the first location to install an Electrify America charging system with the first-ever certified cooled-cable 350kW charger in the United States.

A “First Charging” ceremony will be held at Brixmor’s Chicopee Marketplace at 591 Memorial Drive, Chicopee, MA on April 25. Brendan Jones, COO of Electrify America and Daren Moss, VP of Operations & Environmental Management, of Brixmor Property Group, will be joined at the event by Chicopee Mayor Richard Kos and Daniel Sieger, assistant secretary for Environment, Commonwealth of Massachusetts."