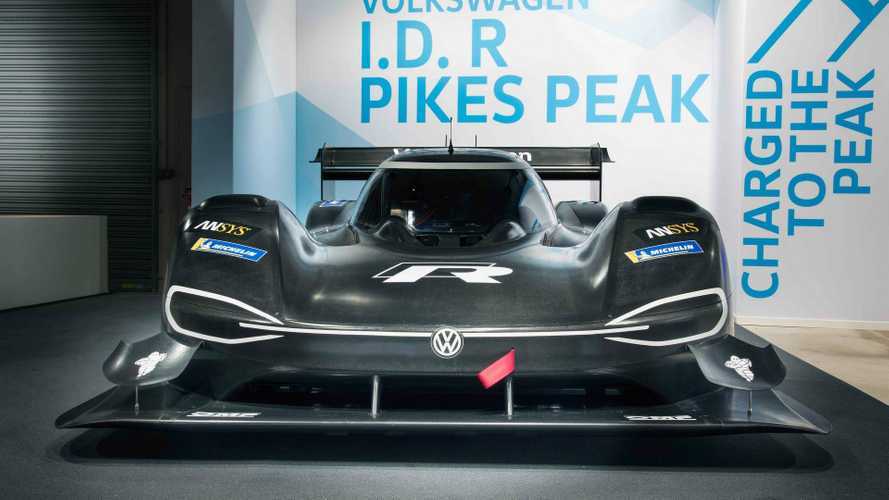 Volkswagen kicked off the teasing game for its fully electric Pikes Peak racer back in October 2017 and after showing fully revealing images last month, it’s now ready to talk about the technical specifications. Packing two electric motors, the zero-emissions race car develops a combined output of 680 horsepower (500 kilowatts) and an immense amount of instant torque: 650 Newton-meters (480 pound-feet). If these output numbers don’t impress you, it’s important to mention the vehicle weighs less than 1,100 kilograms (2,425 pounds), so it should be an absolute rocket.

In fact, VW mentions the I.D. R Pikes Peak catapults itself to 62 mph (100 kph) in just 2.25 seconds, which the company says makes the fully electric car quicker than both Formula 1 and Formula E racers. Top speed has not been revealed, but it’s not really crucial taking into consideration acceleration will be significantly more important when tackling all 156 corners of the grueling hill climb in Colorado Springs.

Since this is a proper race car, the engineers focused on performance rather than range, which is why the lithium-ion batteries were developed to maximize output. The I.D. R Pikes Peak features an energy recovery system and VW estimates it will be able to recuperate 20 percent of the necessary juice during the hill climb.

We will get to see it in action on June 24 when VW’s new electric weapon will tackle the 12.42-mile (19.99-kilometer) track, starting at 2,862 meters above the sea level and climbing 1,440 meters on asphalt. Behind the wheel of the I.D. R will be defending Pikes Peak champion, Romain Dumas, who will try to take down the record for the fastest electric car: 8 minutes and 57.118 seconds. The record-breaking attempt will take place 31 years after a twin-engined, all-wheel-drive Golf failed to finish the event, prompting VW to say it's now high time for a "rematch."