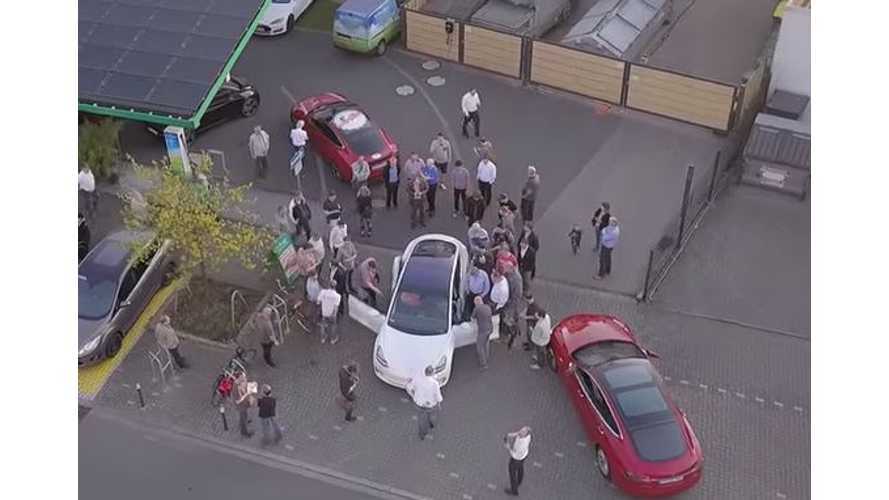 This Tesla Model 3 makes a "surprise" visit to crash a party in Germany.

If you follow You You Xue's Tesla Model 3 Road Trip on social media, you're probably well aware that he's now touring Europe in his Model 3. It seems he's doing so much to Tesla's disliking, but we've learned that You You does what You You wants to do. He's had to overcome some pretty ridiculous situations when it comes to charging the car, but, nonetheless, he's traveling the continent and seems to be enjoying himself fully.

We had a chance to hitch a short ride in Florida during his previous American tour. He went on to traverse the entire East Coast and travel into Canada on his way back to California via a northerly route. Since then, You You has been meticulously planning this European experience, which has now been underway for a number of days.

In regards to the situation in Germany, he explained that they had "accidentally stumbled" across an opening ceremony for a new Supercharger in the country. You You went on to say that Tesla didn't seem too happy about their unannounced appearance. The Model 3 surely steered the patrons' attention away from the party's initial intentions. Below are the related post and a few videos of the event:

THERE IT IS! The first fully electric car that will be sold more than a million times by 2020! The Tesla Model 3

It was a fantastic event at Ladepark Hilden. Meeting of enthusiastic people to see the transition to sustainable transport accelerating and gaining momentum.

Amazing! People freaking out to get inside the Tesla Model 3! :D