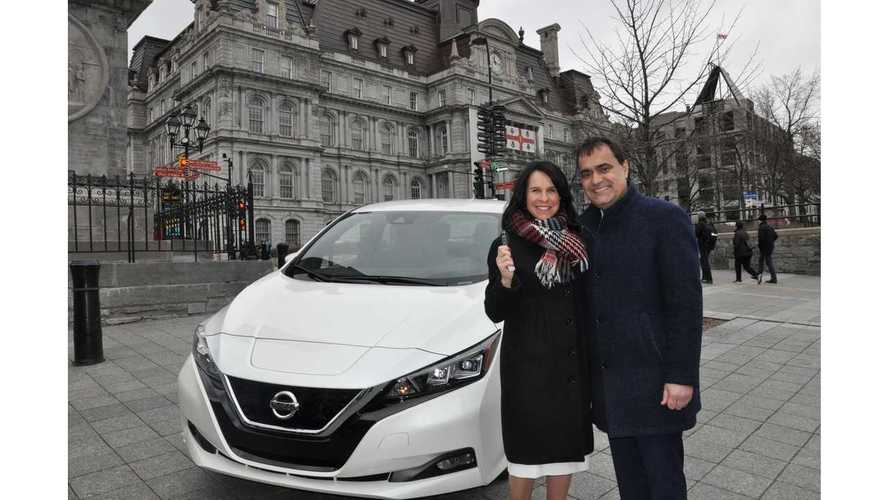 The city of Montreal is expanding its electric car fleet with the addition of 100 second-generation Nissan LEAFs, nearly doubling its number of BEVs.

The first all-electric cars were acquired by the city in 2009, while the Nissan LEAF appeared in Canada in 2011 (50% of LEAF sales in Canada occurred in Quebec).

Between 2015 and now, Montreal increased its number of BEVs from 18 to 129, including 107 first-generation LEAFs.

With the addition of 100 more LEAFs in the coming weeks, the fleet will reach 229 and 90% of those will be LEAFs.

The city is using electric cars to meet various needs, but notably for inspection services, particularly in the building sector, or for public services in the architectural, landscaping, urban planning and urban development sectors.

"In 2005, the City of Montreal committed to reducing its greenhouse gas (GHG) emissions by 30 per cent by 2020 compared to its 1990 emissions. One of the most important means of combating greenhouse gas emissions includes the electrification of part of the vehicle fleet, and we take this top priority very seriously. For example, the City of Montreal owned 18 fully electric vehicles in 2015, it currently owns 129 and it will own close to 230 by the end of the year. The addition of 100 new Nissan LEAF fully-electric vehicles into our fleet is very good news."

"We are delighted to see the commitment of the City of Montreal to zero-emission mobility and to see that the Nissan LEAF will play a major role in helping them achieve their goals. The Nissan LEAF is the ideal vehicle for corporate fleets and the City of Montreal is a great example. They slowly integrated EV vehicles into their fleet over the past couple of years, which allowed the assigned drivers to get familiar with this new way of driving. The Nissan LEAF offers a very compelling value proposition, especially for fleet operators. The Nissan LEAF dramatically reduces the costs of regular maintenance time and costs due to not having an engine, and now more than ever, there's significant savings when driving fully-electric."

"Quebec is a crucial market for Nissan, and I am very proud to see how this community has changed dramatically in recent years to adopt new measures to embrace electric mobility. This begins with developing the public charging infrastructure network across the province, a project in which we participated as a partner with the Electric Circuit to facilitate access to quick charging stations. In addition, I salute the commitment of residents, businesses and associations who, like the City of Montreal, have made the leap towards the adoption of 100 per cent electric vehicles and have become ambassadors of zero-emission mobility."