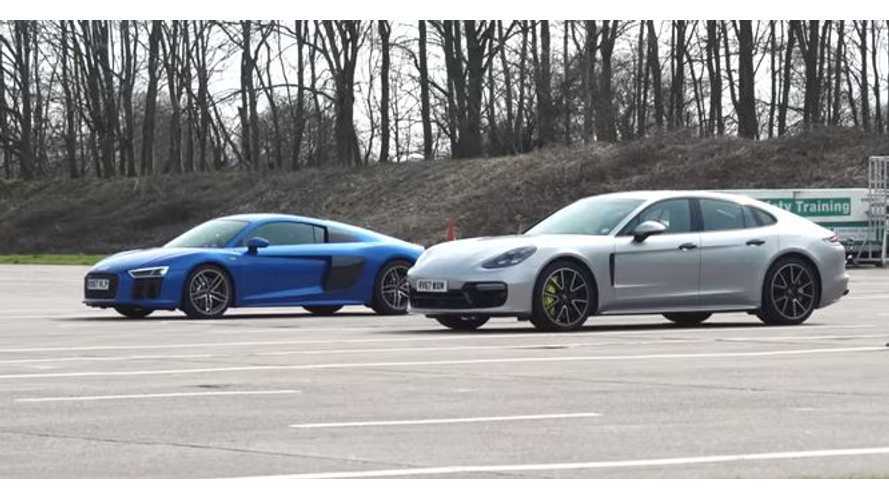 The Porsche Panamera Turbo S E-Hybrid is, in theory, a hatchback, but as this video goes to show, it’s far from being your ordinary hatch. The Brits over at Autocar decided to get the range-topping version of the Panamera and make it duel in a drag race against a significantly different machine, a fully fledged supercar. The car of choice was the Audi R8 V10 in the standard specification, so it wasn't the more powerful Plus version packing 602 horsepower instead of the base model’s 532 hp.

Why in the world would someone line up a naturally aspirated supercar against a bonkers hybrid hatch? Just for fun, of course. While weight may be the biggest enemy of performance, there are other factors that need to be taken into consideration. Despite being a whopping 715 kilograms (1,576 pounds) heavier, the 680-hp Panamera was substantially quicker right from the start.

How was that even possible? Well, let’s have a look at the torque gap between the two. Thanks to its hybrid powertrain consisting of a biturbo 4.0-liter V8 engine and electric motor, the Panamera pushes out a massive 626 pound-feet (850 Newton-meters). The Audi might have a bigger combustion engine, a 5.2-liter V10, but it lacks forced induction and the electric boost, and as such it packs “only” 398 lb-ft (540 Nm). Doing the simple math, the Porsche has an extra 228 lb-ft (310 Nm) on tap.

Related: 60% Of Porsche Panameras Sold In Europe In Q1 Were PHEVs

Still, the R8 is a bona fide supercar whereas the Panamera is more of a sporty and luxurious family car, so the race should be at least close. Well, it’s not. The Porsche was quicker in the sprints to 60 mph (96 kph) and 100 mph (161 kph), as well as in both the quarter and half mile comparisons. At the end of the ½ mile, the Panamera still had the higher speed (151.28 mph vs 150.42 mph).

These are certainly great times to be alive, especially if you have the means to buy the Panamera Turbo S E-Hybrid. It’s luxurious, practical and insanely quick, with Autocar registering the sprint to 60 mph in only 3.18 seconds while the 0-100 mph run took 7.53 seconds.

The price to pay for this well-rounded package is a hefty $184,400 before any options, which makes it $19,500 more expensive than the standard R8. The Plus version costs $10,000 more than the Panamera and aside from packing an extra 70 hp, it also has an additional 15 lb-ft (20 Nm) over the regular model, but that probably wouldn’t have made that much of a difference in the drag race.

While the Panamera with its intricate hybrid powertrain represents the future, the naturally aspirated R8 is facing retirement as Audi has strongly hinted the model won’t get a third generation. That being said, this comparison doesn’t show the whole picture as the performance of a car isn’t all about how fast it is in a drag race.