Watch Jaguar I-Pace Caught On The Move In U.S., Plus Images 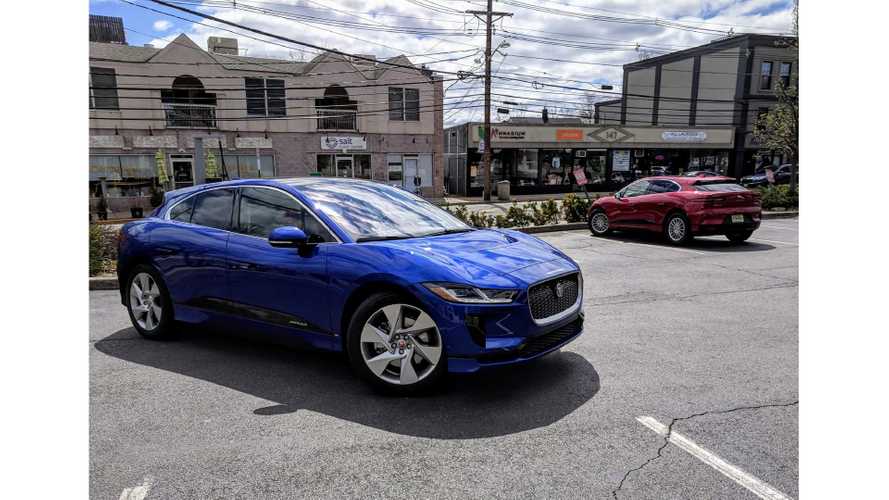 Jaguar's sleek new all-electric crossover, the I-Pace, has been getting a lot of attention since its March 1st world premiere at the Geneva Motor Show, and now we've managed to snap exclusive first images of four I-Paces in New Jersey.

Seen in red, blue, and black below, the all-new I-Pace is certainly a head-turner.

There were actually four Jaguar I-Paces driving on the roads of Northern New Jersey, today

With a 90 kWh battery, 394 HP and an estimated 240-mile range (we believe the EPA range rating will be higher than 240 miles), Jaguar beat the likes of Audi, Mercedes, and BMW to the punch, by being the first established OEM to bring a premium, long-range electric vehicle to market.

There haven't been many sightings of the I-Pace on U.S. roads in the wild, that is, until now. InsideEVs was lucky to catch not one, but four Jaguar I-Paces in Montclair, New Jersey, with JLR employees conducting a tour of testing out public charging stations.

However, the JLR employees kindly allowed us to snap a bunch of exterior shots and even posed the cars for the angles we wanted to capture.

Gallery: Watch Jaguar I-Pace Caught On The Move In U.S., Plus Images