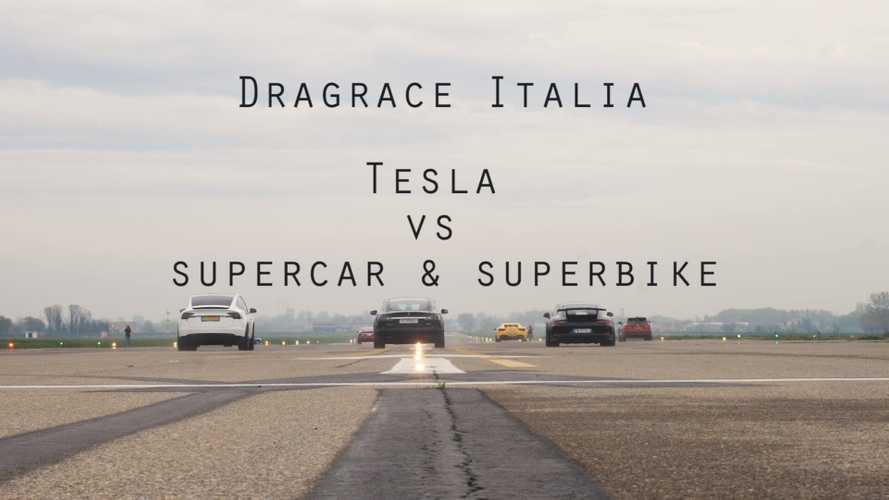 A fleet of fast cars, a superbike, and an airstrip. Sounds like all the ingredients are in place here for some monumental action; gripping, pulse-quickening drama; possibly some celebratory dancing. Before you start the popcorn preparations, though, be forewarned: this is not exactly that sort of video.

Racing does happen, but not in the "grand spectacle" sense. The squadron of speed — which includes a Porsche GT3, a Bentley Bentagya, a brace of Tesla Model S, a Tesla Model X, and a Ducati 1199 Panigale S Corse superbike, among others — does line up on one end of a runway at Aeroporto "Giuseppe Verdi" Parma in Italy, but it appears to be mostly for show.

The real racing happens when each of the entrants, one by one, shoots down the strip and is timed at the quarter-mile mark by Tag Heuer. Now, the thing about runway racing is, unlike a dragstrip, the asphalt is not sticky with glue to minimize wheelspin, so, in essence, the conditions are quite street-like. It is this sort of situation where the Teslas might shine, which is good since the April 8th event appears to have been organized by Tesla Owners Italia, the same group behind the Model S range record set last summer.

So, how did the battery-powered American cars do? According to the list of top results near the end of the video, two wheels are notably better than four, as the Ducati takes the overall win with an amazing 9.79 time. Then, it's the Tesla P100D with a 10.86-second pass that truly speaks to the possibilities of digital traction control (and lots and lots of amps!). The Model X makes a case for itself in fourth place with an 11.74-second result that puts it proudly ahead of the Bentley Bentayga at 11.92 seconds.

All in all, it looks like a good time was had by all attendees. If the official video above wasn't quite enough action for you, we have a few more minutes of bonus footage below. One quick video of the field making a dramatic pass for the cameras, as well as some scenes from the various runs. Enjoy!