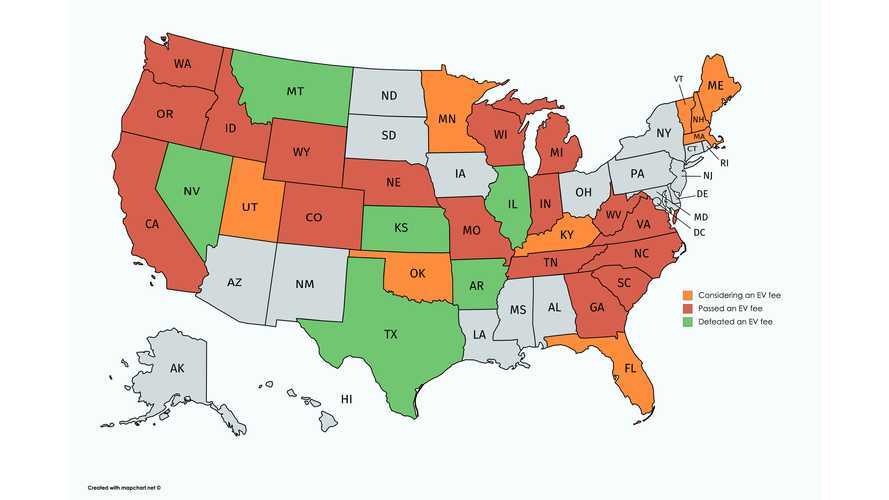 The Sierra Club released a map with states that adopted fees on plug-in electric cars and encourages us to not be fooled into thinking that annual fees on EVs are fair.

Compared to several years ago, the number of states that applied fees to EVs highly increased to 17 and 9 more are considering fees.

In most cases, the fees are from $50 to $200, depending on state and whether it's plug-in hybrid or all-electric vehicle.

States argue that the less fuel vehicles use, the less money goes to the maintenance of roads, highways and bridges, but Sierra Club points out that the drivers - by purchasing EV - lower emissions within the state.

Moreover, in many cases, the EV annual fees are the same or higher than in the case of ICE cars, while the total amount of taxes is already higher for the state, because EVs are more expensive initially.

It's definitely something worthy pf our  consider.

Here is full article from the Sierra Club

Don’t Be Fooled: Annual Fees on Electric Vehicle Drivers Are Not “Fair”

In 2015, only a handful of states had fees on electric vehicles (EVs). Today, there are 17 states with newly adopted annual registration fees and nine additional states are considering them -- but don’t be fooled: These fees are unfairly punitive for drivers, while barely making a dent in state coffers.

To cover up their own failure to act, some states are trying to create punitive fees for families that drive electric vehicles. This isn’t a solution. It’s punishing people and families who are seeking to reduce their carbon footprint and drive some of the most efficient and fun cars out there. States must act to care for our roads, highways, bridges, and their maintenance, but not on the backs of families who choose to drive electric vehicles.

Right now, states are trying to impose fees that would charge drivers anywhere from $50 for plug-in hybrids to $200 for fully electric cars. This would be, on average, charging these families $23 more than everyone else. Turns out, EV fees aren’t so fair. Recent analysis by Drive Electric Minnesota looked at the combination of taxes paid by all vehicles and found that EV owners usually pay just as much or more in state vehicle taxes as their fossil fuel counterparts.

Vehicle ownership and operation contribute to multiple state-revenue streams, not just the gas tax. EVs currently contribute more in excise tax and state sales tax than gas-fueled vehicles, as those taxes are based on a car's retail value, which is generally higher for EVs than other cars. For example, the fully electric Nissan Leaf S sells for $30,680, and a basic Tesla S goes for $68,000. Beyond traditional transportation taxes and fees, EV drivers also contribute to electricity sales taxes. Our friends at Acadia Center recently released a policy paper that digs into that and related topics.

Additionally, drivers of gas-fueled cars are not charged a fee on the public costs of the pollution they create, including to our climate and our public health. It is rather disingenuous to claim seeking “fairness” for the costs of road usage but then not to seek fairness for the costs of unhealthy air that harms everyone.

The gag is up. So much for creating a “fair” system.

EV FEES FAIL TO CLOSE BUDGET GAPSPerhaps most important is that these proposed taxes won’t even make a dent in the budgets that these legislators are claiming they would fix. Maine has an annual $159 million funding gap for roads and bridges, and the proposed fees (the highest in the country) would raise only $2.9 million in 2020 -- recovering only a tiny  percentage of its budget deficit. Utah has fewer than 5,000 registered EVs. If its proposed budget passes, it would bring in an additional $400,000 in revenue  -- only .02 percent of a $2 billion dollar budget shortfall. Even in California, the new EV fee is expected to generate only about $200 million over the next decade.

In 2017, the Oklahoma Supreme Court struck down its state’s EV fee, ruling the tax unconstitutional and unjustified. Had H.B. 1449 passed, the fee would have only brought in a million dollars annually to fill a $900 million deficit -- helping offset a mere 1 percent of the deficit. Despite last years’ defeat, Oklahoma lawmakers are giving the proposed fee another go in the 2018 legislative session.

MANY OF THESE EV FEE POLICIES ARE CRAFTED BY BIG OIL

It’s no coincidence that this attack comes at a time when EVs are just starting to take off within the larger auto industry. Reportedly, Koch Industries has spent nearly $10 million dollars annually on a campaign to boost petroleum-based transportation fuels and attack government support for electric vehicles because of the risk EVs pose for the fossil fuel industry. The American Legislative Exchange Council (ALEC), a right-wing state-legislation machine funded by the Koch brothers and several other multinational corporations, introduced a resolution to discourage states from providing subsidies for EVs at its States and Nation Policy Summit.

When oil tycoons consider a rise in EV drivers to be a threat to their wallets, you know EVs are taking off.

The truth is that the EV fees popping up around the nation are neither fair nor effective at closing budget deficits. They are, however, likely to affect EV adoption and slow their benefits from being enjoyed by all when the need to incentivize and accelerate the switch to cleaner cars is strongest.These fees function as a “gas ceiling,” a systemic barrier faced by people who can’t or don’t want to afford punitive fees. People with lower income are disproportionately impacted by air pollution, which includes women, people of color, and the physically disabled. All people deserve to get from point A to point B without suffering from harmful exposure to dirty air -- not just the people who can afford the extra costs of emission-free driving.  Prior to its zero-emissions vehicle (ZEV) fee, Georgia was one of the nation’s most thriving ZEV markets. When the state legislature repealed its $5,000 tax credit in 2015 and imposed a $200 annual registration fee (the largest fee levied on ZEVs to date in the U.S.), sales of ZEVs tumbled by almost 90 percent.

Growth of the EV market is critical for states to meet their responsibilities to provide their residents with healthy air to breathe and a healthy planet to inhabit. At a time when every federal and many state environmental protection policies are under attack  -- from emissions standards being rolled back to ending funding for research on toxic chemicals that harm children's health -- we must resist any effort that works as a barrier to expanding zero-emission transportation and instead advocate for fair, effective policies that expand access to cleaner cars and cleaner air. People must be incentivized, not penalized, for switching to cleaner vehicles. And we know these incentives work. Recently, New York Governor Cuomo announced that EV sales rose more than 60 percent in New York in 2017 over 2016 after a consumer EV rebate of up to $2,000 per driver was launched in early 2017.

If state legislators don’t want to prioritize fair fiscal laws, clean air, or closing budget shortfalls in meaningful ways, then they are forcing our hand. We are left with no choice other than to ban the sale of all gas-powered cars. Just joking! (...or are we?)