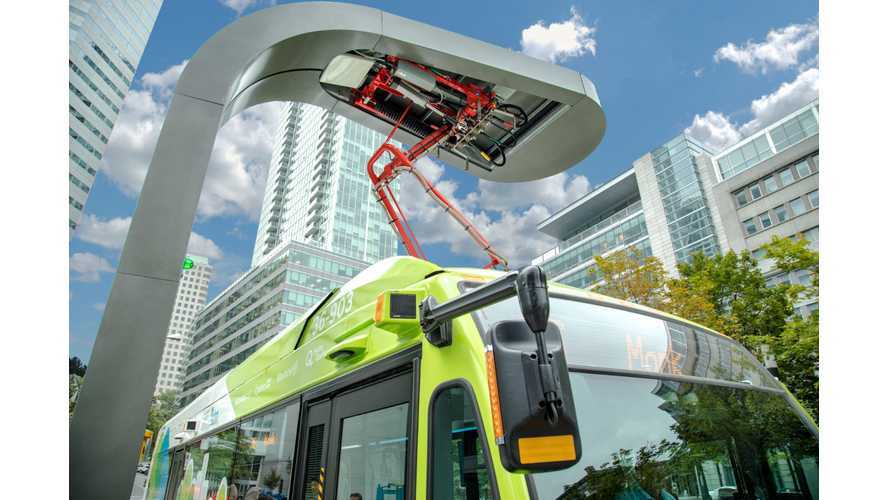 A fleet of electric buses are to be tested in the new Pan-Canadian Electric Bus Demonstration & Integration Trial project with standardized and interoperable buses and chargers in mind.

In the first phase, the trial will take place in three cities (Vancouver in British Colombia, and Brampton and York Region in Ontario) on five routes with 18 buses, supplied by New Flyer and Nova Bus (part of Volvo Bus).

Vehicles will use OppCharge overhead fast charging station (usually 150kW, 300kW or 450kW) supplied by the ABB and Siemens.

Today, the Pan-Canadian Electric Bus Demonstration and Integration Trial: Phase I is being launched at TransLink in Vancouver as part of a national coordinated effort to advance zero emissions transit technology, spear-headed by the Canadian Urban Transit Research and Innovation Consortium (CUTRIC).

“With visionary investments by federal, provincial, and municipal governments, we are launching the Pan-Canadian Electric Bus Demonstration & Integration Trial: Phase I – which has a national project value of $40 Million and encompasses 18 standardized and interoperable electric buses, seven standardized and interoperable overhead chargers, and on five routes in three cities,” says CUTRIC Executive Director & CEO Josipa Petrunic. “Today’s announcement is building the future of low-carbon smart mobility in this country.”

“This funding investment will support the first global trial to integrate competitive bus manufacturers with competitive charging station manufacturers – all of whom are designing and delivering interoperable high-powered charging systems for on-route charged electric buses – across multiple municipalities and utility jurisdictions,” says Petrunic. “This type of collaboration, standardization and integration is proving to the country and the world that transit agencies can be at the forefront of technology development and job creation. And it’s happening in Canada first.”

TransLink is working with two Canadian transit vehicle manufacturers (New Flyer Industries of Winnipeg, Manitoba and Nova Bus, of St. Eustache, Quebec) and two charging station manufacturers (ABB Group and Siemens Canada) to deploy four electric buses and two overhead electric charging stations that plug into an open protocol known as the OppCharge protocol (https://www.oppcharge.org/ ) – first jointly developed by Siemens and Volvo Bus Corporation. The protocol standardizes the design of the off-board pantograph that connects the high-powered charging station to the bus, communications between the bus and the charger, and performance metrics of the overall system.

“To get this project going we had to sell a vision to a lot of sceptics. The vision is one in which publicly shared mobility services, like transit, can be faster, cheaper and greener than automobiles in all jurisdictions of the country in the future,” continues Petrunic. “TransLink, Brampton and York Region bought into that vision with us, and today’s announcement is the first step in a multi-year effort to make it reality.”

The project will continue to attract electric vehicle manufacturing in Canada among heavy-duty platform designers and manufacturers – helping to grow jobs in the low-carbon economy nationally.

“This is good news for Canadian job growth in the manufacturing and tech sectors which must demonstrate that their e-buses and e-chargers work seamlessly with one another wherever they are used,” states Petrunic. “Growth in skilled trades will be aligned to electric bus manufacturing by Nova Bus and New Flyer, charging system innovation by ABB Group and Siemens, and electric mobility maintenance support in Canada.”

The trial will also integrate neutral third-party vehicle and systems analyses by the National Research Council of Canada.

“Our job is to change the world and to do it by radically transforming the transportation and mobility landscape in this country,” Petrunic says. “CUTRIC is proud to have spearheaded this Canadian first launching in Vancouver first. We are showing the world Canada is a leader in driving down emissions, improving transportation, and creating greener, cleaner and more liveable communities.”