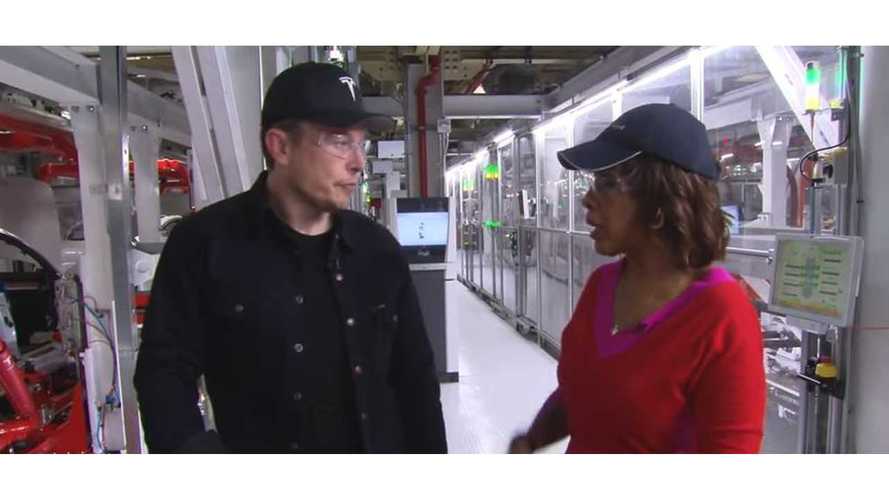 In a fascinating series of interviews televised throughout the week, Elon Musk talked Tesla with Gayle King on CBS This Morning. The focus was, of course, on Tesla's production progress at the company's Fremont factory for the hotly-anticipated Model 3. While Musk acknowledged that Tesla has fallen behind, he remained confident that the factory would be able to ramp production more effectively moving forward.

That said, Musk acknowledged that delays were inevitable. He forecasted, "It’s gonna be six to nine months longer than expected. It’s a six-to-nine-month time shift, that’s literally it, and three of those months have already passed." However, he promised, "There shouldn’t be a question mark as to whether somebody’s gonna get their car... you’ll definitely get your car."

Musk takes these delays seriously. So much so that he's been "sleeping on the factory floor... because I don’t have time to go home and shower." Why does Musk (as CEO) go to such lengths to ensure better output at the factory? He explained, "I don’t believe like people should be experiencing hardship while the CEO is like off on vacation." Musk also addressed concerns arising from naysayers on Wall Street ranging from analysts to credit rating agencies.

Above: A look at the Model 3 production line at Tesla's Fremont factory (Image: Teslarati via CBS This Morning)

Nevertheless, incremental progress is happening, albeit in stages. Musk noted, "We were able to unlock some of the critical things that were holding us back from reaching 2,000 cars a week. But since then, we’ve continued to do 2,000 cars a week." He also acknowledged issues surrounding too much automation. Later on Twitter, Musk elaborated that "excessive automation at Tesla was a mistake. To be precise, my mistake. Humans are underrated."

Musk also touched on other recent news. After slanted media coverage about Tesla's Autopilot, Musk reminded everyone that "it’s important to emphasize we’ll never be perfect. Nothing in the real world is perfect. But I do think that long term, it can reduce accidents by a factor of 10." And not shying away from his feud with Mark Zuckerberg, Musk doubled down on recent comments by saying regulation is necessary for social media companies.

To get a consolidated look at all of Musk's comments in one place, check out this collection of videos centralized here via CBS This Morning.