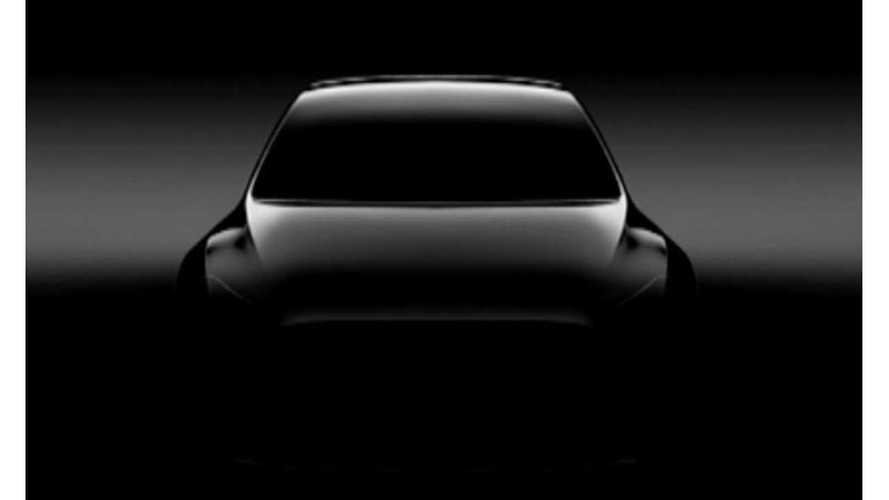 The Tesla Model Y electric crossover may be arriving on the market even earlier than previous reports suggested.

Model Y will be a long-range electric CUV based off the existing Tesla Model 3 and it's expected to be the highest volume offering to date from the electric automaker.

"Tesla is targeting November 2019 as the start of production for its Model Y sport utility vehicle, with production in China to begin two years later, two sources told Reuters this week, shedding some light on the electric vehicle maker’s next project that could tax its resources and capacity."

This falls mostly in line with our previous source-fed report that stated the Model Y would launch in March of 2020. So, production starts November 2019, then a few months later deliveries will commence.

HOT TIP: a supplier source tells me Tesla is sending out drawings and specs to solicit quotes for the Model Y crossover. Start of production targeted for March 1, 2020.

Now that we've got several sources backing a similar start-up timeframe for the model Y, we're fairly confident in the validity of the intel. However, Tesla often delays launches, so even if this is accurate right now, that doesn't mean the Y launch will stay on track.

"Tesla has given suppliers scant details about the program and had not provided a production time frame, but has now indicated the vehicle would begin to be built at its Fremont, California, plant in November of next year, the two sources with knowledge of the supply chain said."

The Fremont factory can't handle the expected production volume of the Y and 3 combined though, so Tesla will eventually seek out other sites for production and it looks like China may be in the running. Per Reuters:

"The two sources said suppliers could be estimating an annual production of 500,000 vehicles in the United States, with much lower volume in China, likely in the tens of thousands. Building 500,000 Model Ys per year would be the equivalent of what Musk has planned for total production in Fremont by the end of this year, although the company is nowhere near that volume."

The sources say that Tesla issued them a supplier “request for information (RFI)," which is a first step in setting up the supply chain for a new car. Typically this RFI is issued more than 2 years ahead of the launch of a new vehicle, but Tesla always sets aggressive timelines, so it likely expects supply demands to be met in less than the industry standard time. Additionally, much of the Y will be carry over parts from the Model 3, so it seems feasible that it could be ready in shorter order.

Tesla has not commented on this new information leaked by supplier sources.