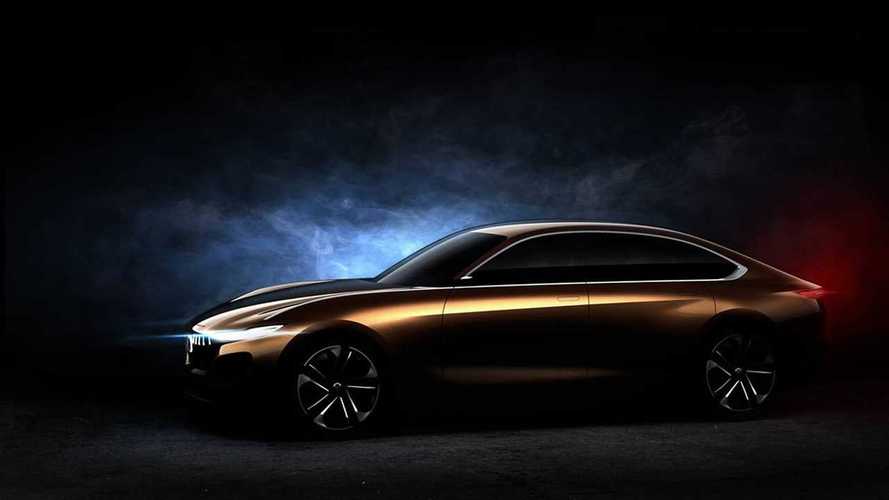 Pininfarina dropped a teaser of a new concept car it plans to introduce later this month at the Beijing Motor Show. Called the H500, the electric design concept is the second car introduced by the famed design studio this year. Last month at the Geneva Motor Show, Pininfarina introduced the HK GT, a sleek, electric vehicle with massive gullwing doors. The new H500 comes after the automaker announced it’d like to become a luxury electric carmaker, joining forces with Hong Kong-based Hybrid Kinetic Group

From what we can see from the teaser, the concept, which is set to make its debut April 25, features a sleek, fastback design. The design is conservative when compared to other Pininfarina designs, but that doesn’t everything about the H500 is boring. There are these fins on the fenders over the front wheels that flow into the windowsills of the driver and passenger windows, which then wrap around to the roof of the car back toward the base of the windshield. The silver accent trim accents the design element.

While the car has a fastback-like appearance with a short rear deck, the design hints that rear passengers could be treated with generous amounts of legroom. The real-world design could mean the concept is close to possibly entering production. However, while Pininfarina does offer a teaser, it’s not hinting at any powertrain details other than to say the H500 is another range-extended EV.

This isn’t the first time the coachbuilder, now owned by Mahindra, has worked with Hybrid Kinetic Group. This is actually the fourth collaboration between the two companies, which kicked off last year at the 2017 Geneva Motor Show with the H600 sedan. That was followed by two SUV concepts, and the HK GT that debut last month.

In the teaser tweet Pininfarina released earlier today, the company hinted that the H500 is the first of two concepts it plans to unveil in Beijing later this month. It’s not clear if the second concept is something new or the HK GT. We’ll keep you posted.