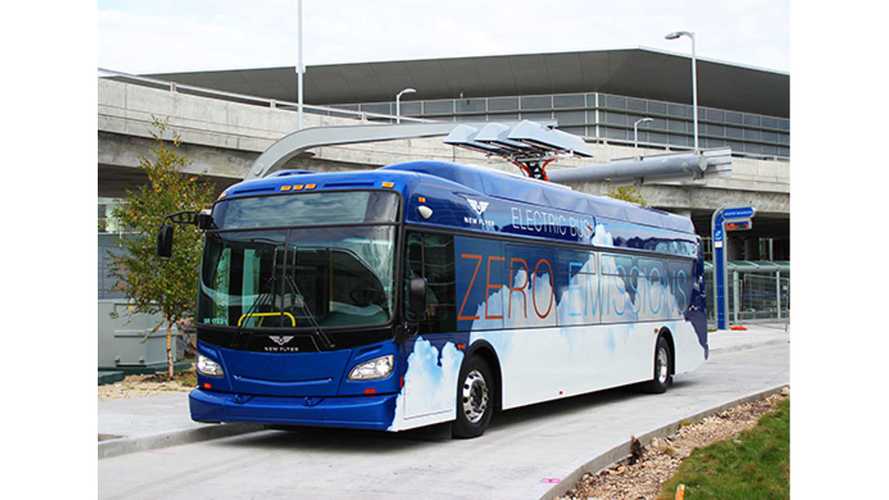 A New Flyer electric bus on a recent testing trip rolled over and injured the driver and two others.

Generally, electric vehicles don't roll over without a fight. This is especially true if they employ the "skateboard" style battery pack, which fits beneath the floor of the vehicle. The packs are extremely heavy and create a low center of gravity, making a rollover difficult.

***UPDATE 2 - April 11 - New Flyer has issued a thorough statement on the manner now. Here it is in its entirety:

On April 3, 2018, a test battery-electric bus owned by New Flyer Industries Inc.'s New Flyer of America Inc. was involved in a single-vehicle incident in Anniston, Ala., while undergoing advanced engineering and road test evaluation for internal study. The driver and three other employees were on board the bus, with no serious injuries reported.

Wayne Joseph, president of New Flyer, stated, "Investigative findings, including on-board telematics, clearly point to the operator being the cause while negotiating an S-turn at a speed significantly over the posted speed limit."

Mr. Joseph further explained: "Following a complete technical and situational investigation, the cause of incident was determined to be driver error and not a result of any design issue, nor component failure. We are relieved that no one was seriously injured, and we will review our test protocols to ensure safety, while continuing to stress our buses to their limits so that when production buses are delivered to customers, they are safe and efficient."

New Flyer has taken appropriate disciplinary action with the driver.

"Contrary to information on various blogs and postings over the past week regarding this incident, the location of the battery packs was not the cause of the incident," explained Chris Stoddart, New Flyer senior vice-president of engineering and customer service. "New Flyer places batteries in both the engine compartment and on the roof to distribute loads similar to those of its diesel-hybrid- or compressed-natural-gas-powered buses (of which there are well over 10,000 safely in service across Canada and the United States)."

Mr. Stoddart continued: "Provisions for rooftop battery packs are common across all North American and international bus manufacturers. In fact, heavy-duty transit buses built by other manufacturers with batteries located only under the floor (between the axles) have recently been tested at the FTA Altoona track and have exceeded front axle weight ratings, resulting in a significant limitation to the number of passengers that can be carried on board."

New Flyer has contacted us with a statement. Apparently, New Flyer sent this statement to some other publications that originally posted the story, but many didn't update the story to include it. No secrets here at InsideEVs  ... if the organization sends us a reputable update on the situation, we will gladly share it with our readers. It follows in its entirety:

Preliminary findings suggests operator error as the likely cause of the accident and not the position of battery packs on the New Flyer bus. Blaming the positioning of batteries is irresponsible speculation, and all North American electric bus manufacturers (New Flyer, BYD, Proterra and others) have provisions for some rooftop located batteries.

It is irresponsible for any party to suggest without evidence that an incident involving a test bus at New Flyer’s facility has any relevance to battery location.

All New Flyer buses on the road today meet or exceed all applicable motor vehicle regulations and safety standards.

As originally reported by The Anniston Star and relayed by Electrek, the New flyer battery-electric bus was testing near its headquarters in Anniston, Alabama when the incident occurred. It was rounding a corner, went off the road slightly, then rolled over and crashed. Sergeant Michael Webb from the Anniston police department told The Star (via Electrek):

They were going around one of the curves on Werner Drive when the bus went off the road slightly to the right. The driver lost control and it tipped over onto its side and slid to a stop.

We’re not real sure what caused them to go off the road. New Flyer is investigating the components of the bus. Since we didn’t have any major injuries or other property damage, we’re leaving it up to them to investigate if there was a mechanical error.

Fortunately, those involved only suffered minor injuries. Though they were transported to the hospital, reportedly they are okay.

So, why did the bus flip?

It seems with all of those battery packs and the vehicle's size and weight, a very abrupt maneuver at high speeds would be required for it to go over so easily.

Interestingly, it appears that New Flyer positions some (or all) of the battery packs on the roof of the bus. This would have a completely opposite effect than locating the batteries below the vehicle's floor. A high center of gravity could cause these buses to be quite unstable. However, we don't have enough information at this point to know exactly what happened.

We did stumble upon an interesting Tweet related to the accident. It implies that electric bus competitor Proterra may have voiced concerns about such a design. Again, we can only hope the investigation will bring us some answers.

Case against attempting to convert ICE-age school buses to electric? That's what Proterra is arguing.

"Three New Flyer employees were injured Tuesday afternoon when a bus they took for a test drive rolled over, officials said on Wednesday."https://t.co/0vrTiVjRnG