See The Tesla Semi Spotted On A Flatbed In Iowa 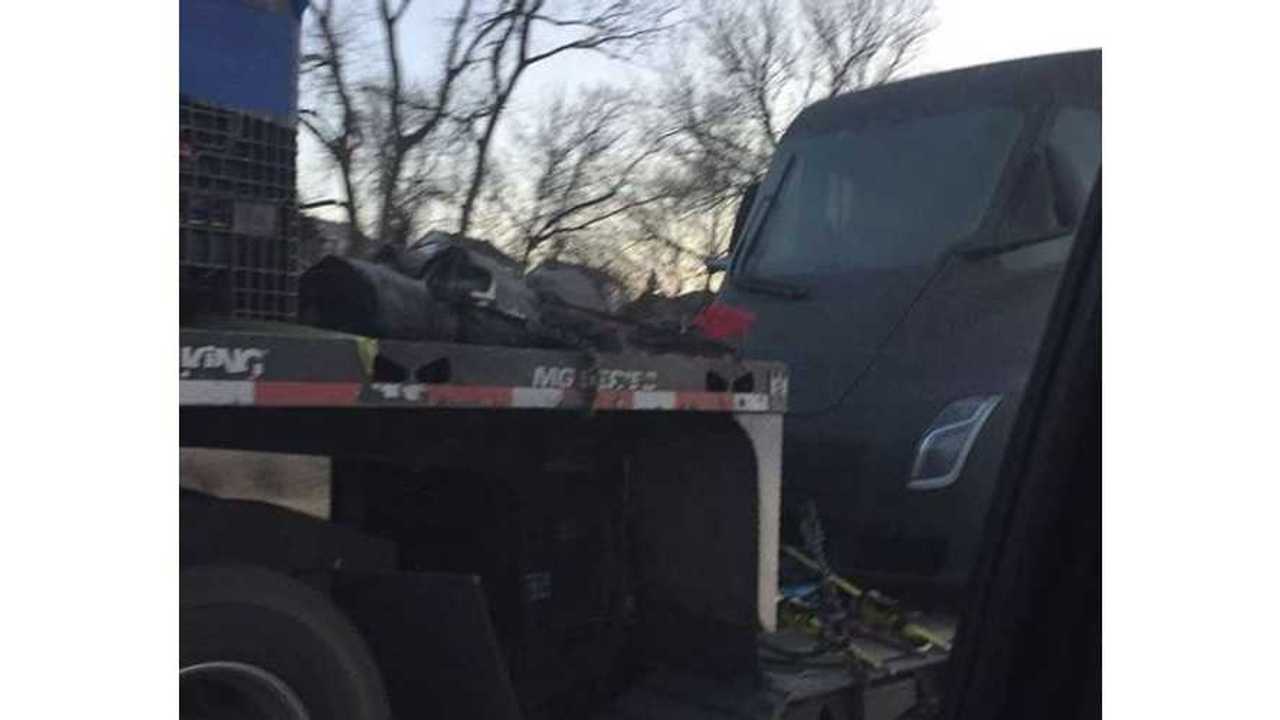 The grainy images are admittedly of very poor quality, but still we can easily make out the Tesla Semi being hauled by what appears to be another semi.

The uploader of the images says that he spotted what's believed to be a charging terminal on the back of the haul truck, which leads us to think that perhaps the Tesla Semi was en route to conduct some sort of charging tests.

Related - Tesla Semi Spotted On Side Of The Highway – Why?

Teslarati reached out to the uploader of these images. After a brief conversation, Teslarati was able to provide these additional details:

"Conversing with Teslarati on the social media platform, Gee noted that the truck was heading east into I-80 in the Des Moines, IA area. The Tesla enthusiast further stated that he noticed some equipment at the back of the short-range Semi."

“There looked to be a ‘charging terminal’ on the back of the trailer, so I imagine they were taking it somewhere to set up testing,” Gee wrote.

Of note is that these images were captured close to the headquarters of Ruan Transportation, a company that's already shown interest in the Tesla Semi.

Back In January, Ruan stated this in regards to the Semi:

“Ruan plans to add at least five Tesla semis to its fleet in 2019 and will test vehicle prototypes in California before they are delivered. Ruan and Tesla have been in frequent communication throughout the development process, with Tesla inviting Ruan representatives to take part in numerous on-site meetings and discussions in the six months prior to the November unveiling.

The price-per-vehicle will be approximately $180,000. Most diesel-powered tractors cost around $100,000, but Tesla predicts that the electric vehicle will pay for itself within two years due to savings in aerodynamics, reliability and fuel. Some specifics, such as the targeted weight, total operating cost and charging method are still unavailable.”

“These new trucks stand to revolutionize interstate transport and change the way we do business. Ruan has always been a leader in efficient transport and logistics, so it makes perfect sense to explore what these trucks could do for us and our customers.”

“We have many questions as the trucks continue to be developed. But we are excited for the potential they hold and are working directly with Tesla to get the answers we need before putting this technology to use.”

“It is our hope that using the Tesla tractor-trailers will eventually reduce our costs, keep our drivers and cargo safer and help us continue our tradition of industry-leading service and reliability.”