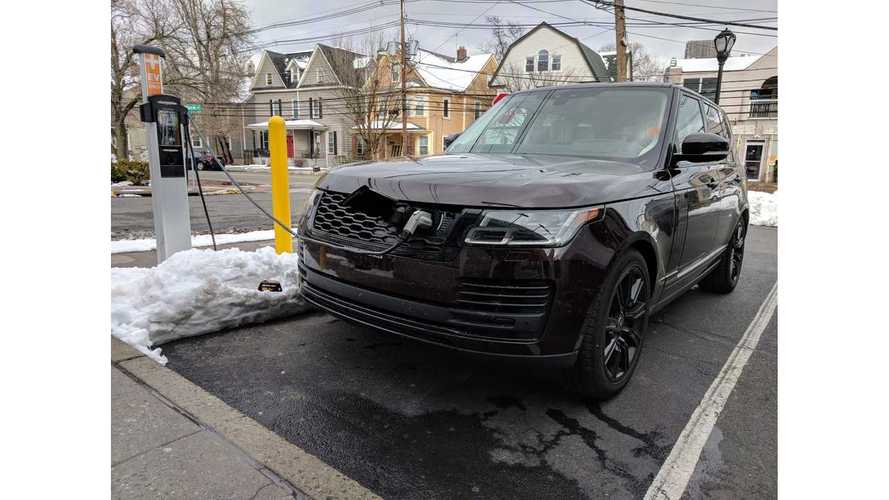 Jaguar Land Rover has garnered a fair amount of EV press recently with the introduction of the production version of the Jaguar IPace.

However, that's not all JLR has been up to with regards to plug-ins.

Related: Jaguar, Land Rover Commits To Electrification Of Every All New Model By 2020

I had the opportunity to catch a Land Rover employee today doing some public charging station testing, with a Range Rover PHEV HSE 2.0L P400e.

The PHEV HSE P400e combines a 2.0-liter turbo-four with an 85-kW (114-hp) motor and the lithium-ion battery pack. The gasoline engine and electric motor combine to deliver 398 horsepower and 472 lb-ft of torque. Range Rover has stated a respectable 0-60 time of 6.4 seconds. The power is delivered to all four wheels via an 8-speed automatic transmission.

Range Rover hasn't announced the official EPA range rating yet, instead, they just list the range at an estimated 31 miles per charge. With a 13.1 kWh (total pack size), it's reasonable to expect close to 30 miles per charge on the EPA rating, if you figure close to 10 kWh will be usable.

As linked above, JLR recently announced that starting in 2020 all new models will be offered in plug-in versions, either BEV or PHEV. Apparently, they'll have at least three by 2019.