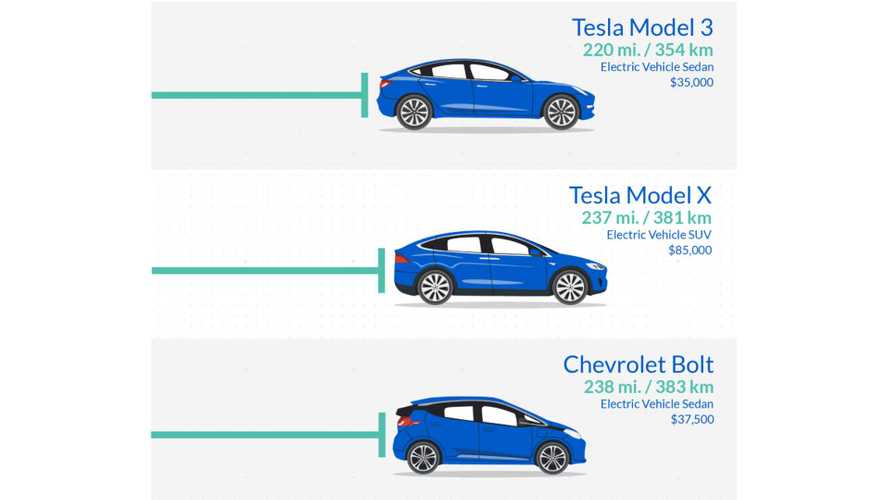 WHEN IT COMES TO LONG RANGE ELECTRIC VEHICLES, TESLA LEADS THE PACK

Even though charging networks are proliferating worldwide, long driving range remains a key factor to consider when evaluating electric vehicle options available today. According to InsideEVs, "It’s all about operating range when it comes to electric cars, with the best of the genre able to run for several day’s drive on a charge... the worst barely able to make it out to the suburbs and back without having to be tethered to an outlet."

Related: Here Are The 10 Longest Range Electric Cars Available In the U.S.

Above: Both of Tesla's sedans boast impressive range (Instagram: enzolau)

So which car company sells the longest range electric vehicles? It's reported that, "Tesla still leads all automakers when it comes to operating range, with its flagship Model S sedan in its top P100D version able to run for as much as a claimed 337 miles on a charge... even the 75D iteration that comes with the car’s smallest battery in the line nets an estimated 275-mile range."

Kudos are also in order for GM. It turns out, "The closest non-Tesla contender here is the subcompact Chevrolet Bolt EV hatchback, which is estimated to run for 238 miles per charge. The remainder of the top 10 longest-range EVs...  still sufficient for all but long-range road trips; the U.S. Department of Transportation says the average commute in the U.S. is about 30 miles both ways."

Above: GM's Chevy Bolt is the only production electric vehicle on the road today with driving range competitive with Tesla's offerings (Instagram: muzichevy)

That said, is electric vehicle range really all that important? Fleetcarma notes, "when talking to someone outside of the industry, one of the first questions they ask is, 'but do they even go very far?' We all know this as range anxiety. The problem is, people think they drive further in a day than they actually do."

In fact, "according to a study by MIT, 87% of trips made in gasoline cars could have been handled by an EV. As range continues to increase with the nextgen models and charging infrastructure improves, it is only a matter of time until range anxiety disappears."

Above: Tesla's Model X is the longest range production SUV on the road today (Instagram: devious_dre)

Regardless, it's important to consider range when purchasing an EV. To that end, Fleetcarma used electric vehicle "models listed on plugincars... created an infographic that compares the range of 14 battery electric vehicles available this year in the US." One caveat though — if the long range variants of Tesla's Model 3 and X (which have 310 miles of range and 290 miles of range) were specified, the top three spots would all be held by Tesla.