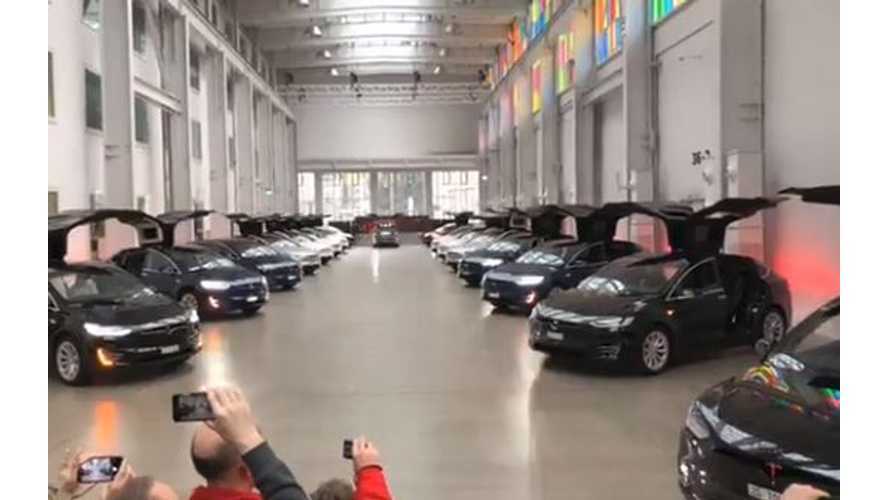 How about a fleet of Tesla Model X SUVs flapping their falcon wing doors in unison as a unique twist at your wedding reception?

According to Teslarati, this happened recently at a wedding ceremony in China. The Model X has an infamous holiday light show Easter Egg that most of you are probably aware of (for those who haven't seen it, we've embedded a video at the bottom of the article). Essentially, music plays, lights flash, and doors flap.

As you can see from @TeslaMoments Instagram post, five Model X vehicles were parked in a line and set to simultaneous perform the show. The best part is that they are actually synced up pretty well:

It turns out this type of show is becoming more and more common among Tesla fans. InsideEVs just received an email from the Swiss Tesla Owners Club, sharing a story about a couple that just set off to travel "around the world" in a Tesla to share the experience. But, how is this related?

There was a send-off event for the couple during which about 20 Model X vehicles "waved" goodbye. A member of the club, Roger Buchwalder, sent us a homemade video of the event. Tesla was on hand and will reportedly be uploading official pictures and video of the event at a later date.

Once we have access to the official media, as well have more details about the couple's journey, we will share. In the meantime, you can visit their site at the link at the bottom of this page.

Below is the promised Merry Model Xmas video: