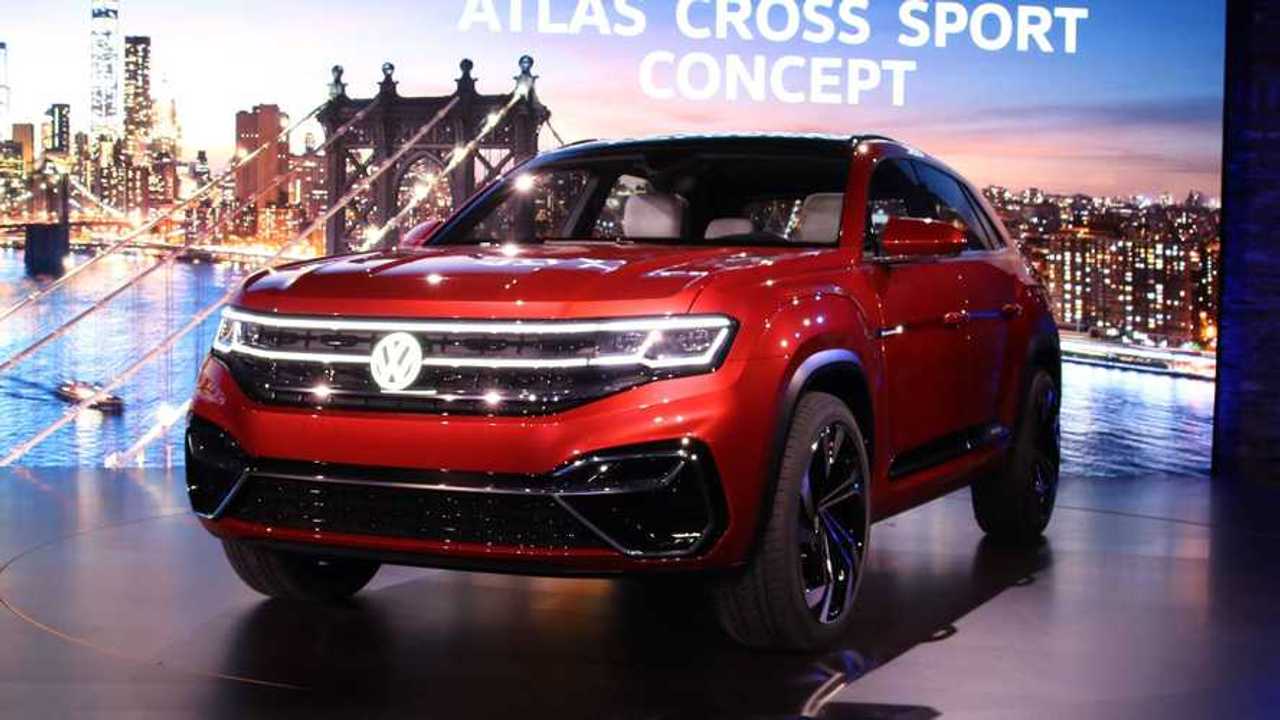 Set to enter production alongside the three-row Atlas in Tennessee in 2019.

Strip away that light-up front grille, downsize the 22-inch wheels a bit, and maybe exorcise a few pieces of chrome, and what you have here is Volkswagen’s next family crossover. The Atlas Cross Sport concept, debuting at the New York Auto Show, closely previews a five-passenger, two-row member of the Atlas family. The real thing is set to start production alongside the existing Atlas and the Passat in Chattanooga, Tennessee, next year.

And don't just take my word for it. At the Cross Sport's introduction tonight in New York, Hinrich Woebcken, CEO of Volkswagen North American Region, said it offers, "a very strong idea" of what the real thing might look like.

Volkswagen has made no secret of its intentions to add more crossovers to its range in a bid to woo SUV-crazed consumers. Last month, in fact, VW notes that the Tiguan and Atlas accounted for 54 percent of its U.S. sales.

The Volkswagen Atlas Cross Sport has the same wheelbase as the standard Atlas and shares its MQB modular platform, but is 7.5 inches shorter in length, giving it very short overhangs that lend the crossover an air of sportiness. The concept is also almost two inches lower in height and more than an inch narrower than today’s Atlas. With only two rows and seats for five, it bridges the gap between the current Atlas (three rows) and the Tiguan (two or three rows, depending on trim).

Up front, the Cross Sport concept looks a lot like the Atlas, with a wide two-bar grille that uses its light-up grille spears as running lights, with a straked hood and tough-looking plastic cladding around the fenders. It’s out back where the concept really diverges from its production big brother, with fat, angled C-pillars that produce an almost 45-degree angle for the rear window. With exhausts inset into the rear fascia, a full-width chrome spear across the liftgate, a roof spoiler, and noticeably flared rear haunches, the Cross Sport hints at a lot of performance from the rear three-quarter view.

In this case, performance means a 5.4-second sprint to 60 miles per hour and 26 miles of all-electric driving. That’s courtesy of a plug-in hybrid powertrain that combines a 276-horsepower 3.6-liter V6 (from the regular Atlas) that works alongside two electric motors; the front one delivers 54 hp and 162 pound-feet of torque, while the rear motor offers 114 hp and 199 lb-ft. A lithium-ion battery stores 18.0 kilowatt-hours of energy for the hybrid system. Total system output comes in at 355 hp.

Interestingly, Volkswagen says the Cross Sport, “could also feature a mild hybrid powertrain,” which may be a closer hint as to the powertrain we’ll see when the vehicle launches. In this case, VW says, a smaller battery pack of just 2.0 kWh would enable a total of 310 hp, with a 6.5-second sprint to 60. Either way, there will be five driving modes: E-Mode uses only the rear motor and the battery pack, Hybrid picks whichever power source is most suitable automatically, GTE is intended for sporty driving, Off-Road activates all-wheel drive by using both electric motors, and Battery Hold/Charge is intended for, as the name suggests, rejuvenating the lithium-ion pack.

There’s even more technology inside the cabin, where the Volkswagen Atlas Cross Sport concept has a larger display for its instrument cluster (12.3 inches) than its touchscreen infotainment system (10.1 inches). The former can show all manner of driving, entertainment, and navigation data. The infotainment system, as on other Volkswagen models, will have proximity sensors and gesture controls, with 2D or 3D navigation mapping among its many features.

We’ll have to wait some time to see just how close the production model’s design stays to this concept, and whether either of the aforementioned hybrid powertrains reach showrooms. But with the introduction of this Cross Sport concept, it’s clearer than ever that Volkswagen is making a big push in the crossover segment.