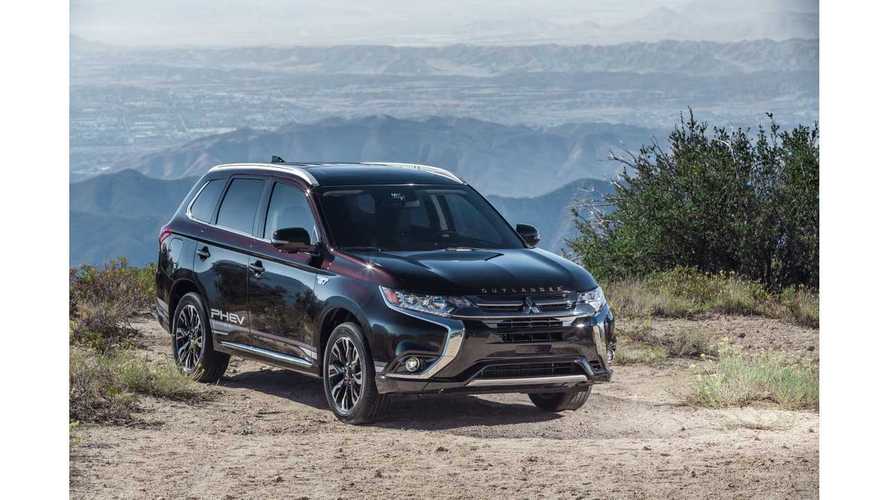 Mitsubishi is moving forward from its best sales year ever in the U.S. primarily due to the Outlander PHEV.

It turns out that 2017 was Mitsubishi's best sales year in the U.S. to date since 2007. Though the Outlander PHEV only sold a mere 623 copies last year, it was apparently enough to net huge gains for the automaker.

The struggling automaker (at least in the U.S.) pushed past the six-figure mark to secure 103,686 deliveries in the country last year, up 7.7 percent from the previous year.

Despite a plethora of U.S. launch delays, the Outlander was the first non-luxury PHEV to officially hit the U.S. market. North American COO Don Swearingen has repeatedly called the new vehicle a halo for the brand.

Projections show Mitsubishi will hit 130,000 in deliveries per year following a three-year period, due in part to the Outlander PHEV.

Automotive News recently interviewed Joe Bizzarro, chairman of the Mitsubishi National Advisory Board and owner of Interstate Mitsubishi in Erie, Pa. Below we share a portion of the most "Outlander PHEV" pertinent information from the interview. To read the entire interview, click on the source at the bottom of the page:

Q: How has the Outlander plug-in hybrid been received by dealers?

A: I saw the numbers that we did last month, and they're quite impressive to see what we're doing with the vehicle. I received three of them two weeks ago, and I've already sold one and I have another sale in the works now. I can't say that it's going to be a volume vehicle like the Outlander Sport, but we're going to see more sales than I think we're anticipating. If we can get that car in front of the public and market it the right way, that car is going to be a big hit.

Q: How are dealers getting the word out about the Outlander PHEV?

Q: Does the Outlander PHEV bring a new customer to Mitsubishi?

A: There's definitely a different market that drives that customer into our showroom. There's a lot of people that heard about it several months ago that have been inquiring about the car. I see that bringing in new customers and I see our customers having something that they can trade their prior Mitsubishis in on to go to a car like this. They know the product. With the PHEV, they see the mpgs and the technology and the great warranty. I think it's going to do both. I think it's going to have people who can stay loyal to the brand and it's going to bring new customers in.

Q: At this point, what is Mitsubishi's brand identity in the U.S.?

Crossovers. I think their identity is getting into the crossovers, their great warranty, their great mpgs. And we have a safe product, too. One thing that they do, they build a good product. Price has always been a big point and there's safety.

Q: Are there any concerns when it comes to inventory?

A: We're going to look nationally to see how we can have more inventory available for dealers if they have a great month. With how our ordering system works, we're three months out on cars. We're going to see if we can get some inventory built sitting somewhere for dealers to pull out of. I don't think we have an inventory issue, but we want to think ahead for dealers. We're coming to the good time of the year with the new product and a lot more marketing.

39 Photos
Keep the conversation going on our Forum. Start a new thread about this article and make your point heard.