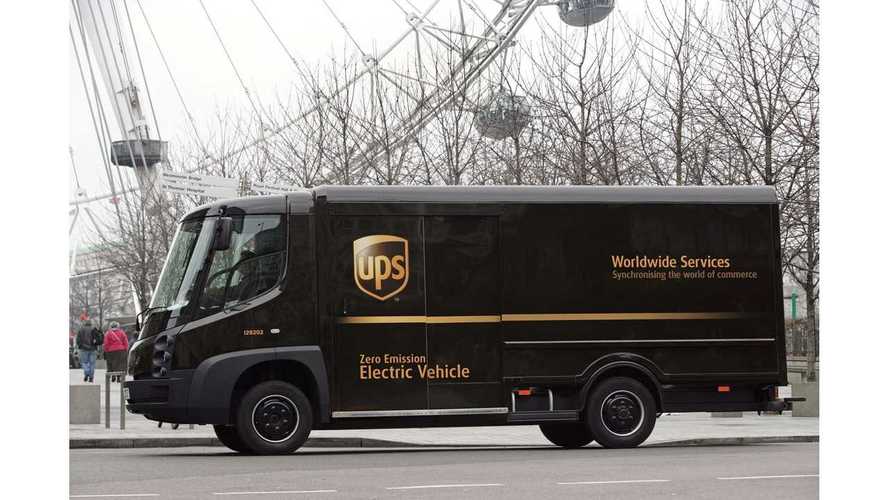 UPS's London fleet of electric delivery vans increased from 65 to 170 without an expensive upgrade to the power supply grid.

Because simultaneous charging of so many vehicles exceeds the site's capabilities, UPS decided for a smart grid management (sounds like delayed charging to us) combined with an energy storage system.

There are no technical details about the project, but an additional 100 EVs easily could demand hundreds of kW if not a MW of additional power depending on the on-board chargers.

For now, the supplier, UK Power Networks Services, uses new lithium-ion batteries, but in the future used, second-life batteries from vehicles are envisioned.

The first all-electric vehicle was introduced by UPS in 1930s. Since 2001, the company has been trying to re-introduce BEVs, but the prices of vehicles and costs of charging infrastructure, combined with limited range was so far preventing the full scale rollout.

"A UPS led consortium has deployed a radical new charging technology in London that overcomes the challenge of simultaneously recharging an entire fleet of electric vehicles (EVs) without the need for the expensive upgrade to the power supply grid. The breakthrough signals the beginning of the end of a reliance upon traditional combustion engine powered vehicles by allowing UPS to increase the number of EVs operating from its central London site from the current limit of 65 to all 170 trucks based there. This major advance – believed to be the first time these systems have been deployed at this scale anywhere in the world – is the result of the ‘Smart Electric Urban Logistics (SEUL)’ project with UK Power Networks and Cross River Partnership, with funding secured from the UK’s Office for Low Emission Vehicles."

"As a result of this initiative, combined with the advances the company announced just last month in reducing the cost of electric vehicles, UPS believes the day is rapidly drawing closer when the acquisition costs to put an electric vehicle on the road, including those associated with getting power to the vehicle, will be lower than the equivalent costs of its diesel counterpart. This development will be instrumental in enabling electric vehicles to be deployed at scale in the world’s cities which is an essential component of tackling the air quality challenges in these urban environments."

"A key part of this initiative is the use of onsite energy storage batteries. Although new batteries have been deployed at this stage, it is envisaged that in the future these could be second-life batteries that have already been used in a UPS EV. Together with the smart-grid, this will pave the way toward a UPS EV infrastructure strategy that can dynamically make use of a conventional power upgrade, a smart grid, onsite storage, and in many cases, local power generation including solar and other alternative sources."

"UPS has a long history with EVs, having first introduced them into its fleet in the 1930s, and, reintroduced modern EVs in 2001. Currently, UPS has more than 300 electric vehicles and nearly 700 hybrid electric vehicles deployed in Europe and the U.S. The company recently ordered 125 new fully-electric Semi tractors to be built by Tesla in 2019, one of the largest pre-orders to date. Additionally, last September, UPS announced it will become the first commercial customer in the U.S. to start using three medium-duty electric trucks from Daimler Trucks Fuso brand, called the eCanter."

“UPS thinks this is a world first, right in the heart of a mega-city. We are using new technology to work around some big obstacles to electric vehicle deployment, heralding a new generation of sustainable urban delivery services both here in London and in other major cities around the world. Electric vehicles are an integral component within UPS’s alternative fuel and advanced technology fleet. Our collaboration with UK Power Networks and Cross River Partnership marks a major turning point in the cost effective deployment of electric vehicles which in turn will play a key role in ensuring the global trend toward urbanization is sustainable. We are applying new technology to make the charging process smarter and our delivery service cleaner.”

"This trailblazing solution has enabled UPS to increase their electric vehicle fleet without upgrading their network connection, paving the way for future electrification of delivery vehicles in our cities. We are delighted to work with UPS and our other partners to design, deliver and operate this sustainable smart-grid solution. This project will deliver a huge impact on improving the air quality for Londoners and contribute to UPS’s legacy of sustainability.”

“Our previous work on electric freight vehicles has shown that local grid infrastructure constraints are one of the main barriers to their large-scale uptake. We need to find smarter solutions to electric vehicle charging if we want to benefit from the significant air quality and environmental benefits these vehicles offer, and we believe this is such a solution.”