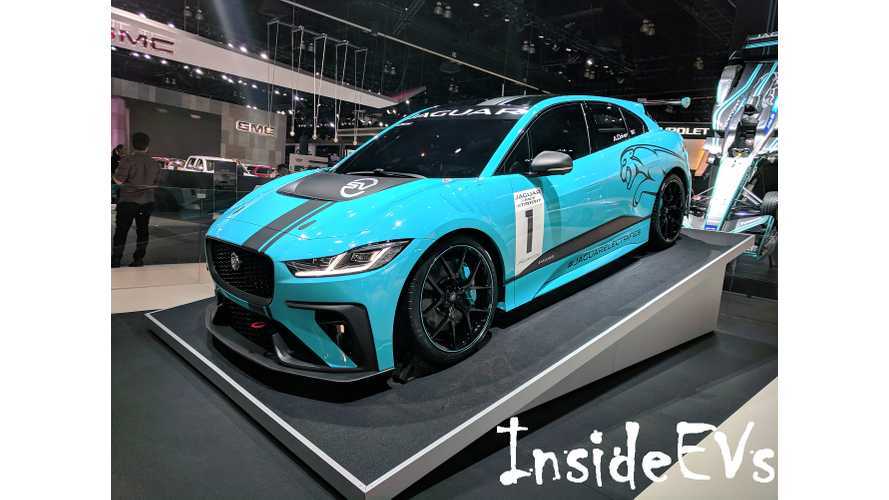 Jaguar hopes the I-Pace will be a world beater, both on the track and at the dealer.

Next year could very well be the year of the EV for Jaguar Land Rover. The new Range Rover Sport P400e electrified crowds at the L.A. Auto Show, and signified the first "big step" forward towards an electrified and fully electric lineup. But next year the Jaguar I-Pace will join the range, the first fully electric SUV from the British marque.

At the L.A. Auto Show, alongside the concept that made its debut initially just last year, the company showed off the race-prepped I-Pace eTrophy, scheduled to make its on-track debut late in 2018 as a Formula E support series.

We sat down with motorsport veteran and the first Jaguar I-Pace eTrophy team owner, Bobby Rahal, who spoke openly about the new one-make series, and the ongoing push for more EVs within the Jaguar range.

For Bobby Rahal, this is "new territory for sure," he said. Starting his career in SCCA feeder categories as a driver, and working his way up to the management team of the former Jaguar Formula 1 team, this is the first time that Rahal is taking a crack at a fully electric race series. But he’s not worried.

The Rahal Letterman Lanigan racing team will field two cars in the 2018/2019 season. Drivers have yet to be announced, but we should know which two people will be behind the wheel as testing commences throughout 2018 before the first race later in the year.

Not only is Rahal is racing expert, he’s a certified Jaguar dealer, too – and the connection between the I-Pace eTrophy and the upcoming production version of the I-Pace SUV is evident. He estimates that the I-Pace will make up "maybe seven to 10 percent of what we sell" in the first year. The dealer has already gone to work on installing charging ports both at their facility, and at the homes of customers.

"Some manufacturers have been slow to recognizing the reality," he said. "But if you look at every manufacturer here, everybody is going electric. That field is going to be really crowded."

With an estimated EPA range of (at least) 220 miles (350 kilometers) via a 90 kWh battery, and the ability the sprint to 60 miles per hour (96 kilometers per hour) in just about 4 seconds, the I-Pace will go up directly against electric SUVs like the Tesla Model X. But Rahal believes that once Jaguar, and other manufacturers begin offering EVs on a mass scale, Tesla doesn’t stand a chance.

"It’s my sense that Tesla is going to feel the pain worse than anybody," said Rahal.

"They go to Tesla because nobody has had it, now they can go back to their Mercedes, or their Jaguar, their Land Rover whatever it may be. The dealer body that all those manufacturers have is much better than Tesla’s dealer body – because they don’t have one."

How will the Jaguar I-Pace ultimately perform against the Tesla Model X?  We will have to wait until later in the 2nd quarter of 2018 in Europe to find out, with a US match-up on Tesla's home turf in the Summer.