Arcimoto Flaunts Its First FUV At The LA Auto Show 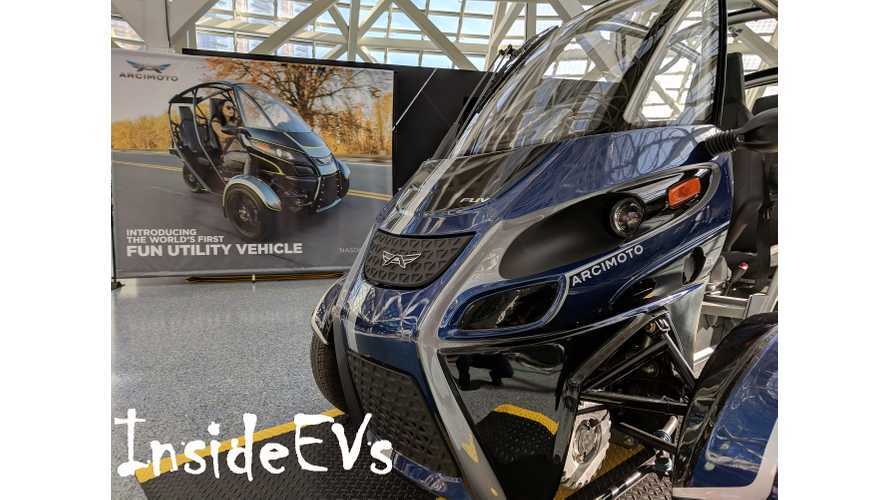 Last week, Arcimoto was popping bottles while also metaphorically smashing them across the bow of its first of ten "Signature Series" three-wheeled, all-electric vehicles, which it has christened the FUV (the "F" stands for fun. No really, it does). This week? It's proudly displaying that result of ten years of development (and redevelopment) for all the world to see at the LA. Auto Show.

If you've seen pictures of this Oregon outfit's vehicle in the past (previously named the SRK), it probably looks a little familiar. Well, looks can be deceiving. Borrowing the page titled "kaizen" from Toyota, Arcimoto practices continuous development, and so, after torturing its alpha-build trikes for the past couple years, it's taken the time to make serious improvements while reengineering every component for mass production.

The result is an FUV that's better in any number of ways. Despite boasting a 19.2 kWh battery that holds double the energy of the earlier SRK builds, the tunnel that runs down the spine of the vehicle and encloses the pack is about four inches narrower, greatly improving ingress and egress. Other key differences include greatly improved driving dynamics. Reconfigured front suspension geometry, along with an overhaul of its hydraulic braking system, has greatly reduced stopping distance and "dive." A stiffer swaybar makes cornering much flatter.

The improvements won't stop there either. Plans are already in place to swap a new motor design into the next 50-unit batch of vehicles. Founder and CEO of this now public company, Mark Frohnmayer, tells us this new technology from supplier SME offers the best traits of permanent magnet and induction designs. While he didn't go into detail for fear of stepping on his non-disclosure agreement, we assume he's talking about the synchronous reluctance internal permanent magnet motor (SRIPM) that SME has started touting with claims, among other things, of up to 95 percent efficiency.

When its done dusting off the glitter of the LA show, it's back to work for this small but globally ambitious team. With around 2,000 reservations in hand that it plans to deliver on in 2018, it also needs to spend some effort on the fabrication process itself. It not only wants to increase output capacity to 10,000 examples of its unique city transporter in 2019, but create a replicable system that can be exported to the different markets that it wants to address. This will help with the affordability of a machine that starts at $11,900 in the U.S..

If you want to join the Arcimoto party, we suggest you start by watching Frohnmayer address his grand opening audience, with some shots of both previous and current generations of its signature vehicle sprinkled throughout. You'll find a full gallery of photos of the first Signature Series FUV on its LA Show pedestal just below that.