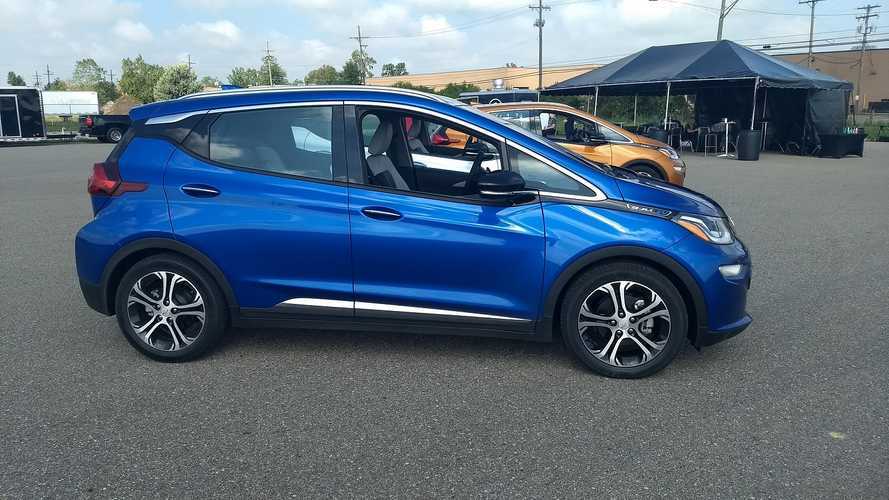 The Chevy Bolt EV, faced with little competition, has made its mark on 2017 in the US

The Chevrolet Bolt EV is ending the year with a bang, as the 238 mile EV alone is following through on earlier sales estimations for rounding out 2017.

The Bolt EV finds itself in a pretty great situation these days, as the Tesla Model 3 still finds itself struggling with production issues, and the new 2018 Nissan LEAF has, as of yet, launched only in Japan...both of those longer range/lower cost EVs are not expected to put up serious numbers until January at this point, leaving the market to the Chevy alone.

The new 2018 Nissan LEAF will be the Chevy Bolt EV's strongest competition...when it arrives that is

Add in the fact that November and December are historically the best selling (not leasing) months of the year for plug-ins (ex-Tesla) - thanks to the way the $7,500 fed credit works, and GM's EV now finds itself as America's best selling plug-in offering for the 2nd month in a row, and for the 3rd time in the past 4 months.

The month's sales also make 9 consecutive months of gains.  For the year, 20,070 have been delivered - second only to the Tesla Model S, which will take down the year's best-selling title for the 3rd year in a row.

Also of note:  While we don't expect it to affect inventory levels or production in any meaningful way, the 2018 model year Bolt EV production switch-over gets underway in Orion, Michigan in about 2 weeks.  The Bolt is more-or-less unchanged, so no extended issues are expected...other than overall production will likely scale back some (or shift to international allocation) as Q1 of a new year is not exactly known for brisk EV sales.

During the month, GM also took some time to help outline its future electrification plans, that will include up to 20 electric vehicles.  In the short term, GM will take the wraps off 2 new all-electric offerings that will be arriving in the next two years.

The first is a Bolt-based Buick utility vehicle that we exclusively reported on back in July from a source who attended a GM focus group...and of which GM accidentally included in a presentation given by CEO Mary Barra (check out that photo below).  We expect to see this model debut in Detroit in January, and be available likely in the Fall.

An InsideEVs source anonymous) was at a focus group this Summer, and confidently states THIS is GM's next all-electric vehicle - a compact utility offering under the Buick badge

While the Chevy Bolt EV sells strong into a wasteland of other affordable, long range EVs, its dealership sibling Chevrolet Volt not only has to compete with the Bolt, but a seemingly endless range of plug-in hybrid choices.

This month's new entry coming in the form of the Honda Clarity PHEV - which has been priced strongly ($33,400 for a mid-size car with 47 miles of range), and is likely the Volt's toughest competition to date - provided Honda keeps it in stock ... still a big if.

Next month it gets even tougher, as the long-anticipated (and much delayed) Mitsubishi Outlander PHEV arrives, as well as potentially the Kia Niro PHEV (details)...although that vehicle has suffered from the typical Hyundai-Kia 'we promise a date, but don't come close to hitting it' disease.  Instead of arriving in November, the Niro PHEV is still waiting on a price...although Kia insists the plug-in is "anticipated in retailer showrooms by the end of this year".

Still, the news is pretty good overall for GM, as the company sold over 4,700 plug-ins in November, an all-time high!