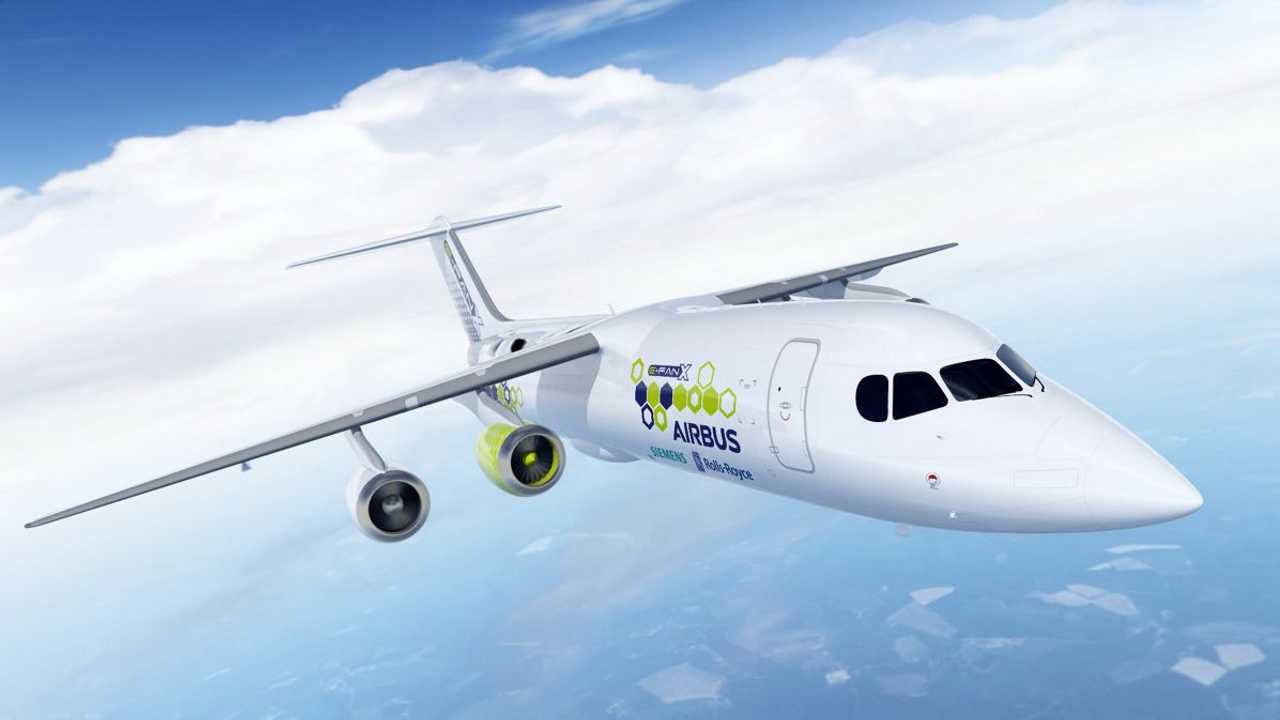 Airbus, Rolls-Royce, and Siemens team up to develop E-Fan X hybrid-electric flight demonstrator in 2020 using BAe 146 as a flying testbed.

In the first step, the aircraft will be equipped with one electric motor (2 MW) that will replace one of the four gas turbine engines. It will be powered from the 2 MW generator and 2 MW battery pack (the capacity wasn't disclosed).

In the second stage, the second engine will be replaced with an electric motor, but still the demonstrator will have two gas turbine engines.

We're not sure if we'll ever see a plug-in hybrid commercial project like this (with electric-only motors) actually become a thing, but maybe the aircraft industry will see a breakthrough entrant like (Tesla did in the automotive industry) and embrace electric flight.

"The three companies together announced the groundbreaking collaboration, bringing together some of the world’s foremost experts in electrical and propulsion technologies, at the Royal Aeronautical Society in London.

The E-Fan X hybrid-electric technology demonstrator is anticipated to fly in 2020 following a comprehensive ground test campaign, provisionally on a BAe 146 flying testbed, with one of the aircraft’s four gas turbine engines replaced by a two megawatt electric motor. Provisions will be made to replace a second gas turbine with an electric motor once system maturity has been proven."

"The E-Fan X demonstrator will explore the challenges of high-power propulsion systems, such as thermal effects, electric thrust management, altitude and dynamic effects on electric systems and electromagnetic compatibility issues. The objective is to push and mature the technology, performance, safety and reliability enabling quick progress on the hybrid electric technology. The programme also aims at establishing the requirements for future certification of electrically powered aircraft while training a new generation of designers and engineers to bring hybrid-electric commercial aircraft one step closer to reality.

As part of the E-Fan X programme, Airbus, Rolls-Royce, and Siemens will each contribute with their extensive experience and know-how in their respective fields of expertise:

-       Airbus will be responsible for overall integration as well as the control architecture of the hybrid-electric propulsion system and batteries, and its integration with flight controls.

-       Rolls-Royce will be responsible for the turbo-shaft engine, two megawatt generator, and power electronics. Along with Airbus, Rolls-Royce will also work on the fan adaptation to the existing nacelle and the Siemens electric motor.

-       Siemens will deliver the two megawatt electric motors and their power electronic control unit, as well as the inverter, DC/DC converter, and power distribution system. This comes on top of the E-Aircraft Systems House collaboration between Airbus and Siemens, launched in 2016, which aims at development and maturation of various electric propulsion system components and their terrestrial demonstraion across various power classes."

“The E-Fan X is an important next step in our goal of making electric flight a reality in the foreseeable future. The lessons we learned from a long history of electric flight demonstrators, starting with the Cri-Cri, including the e-Genius, E-Star, and culminating most recently with the E-Fan 1.2, as well as the fruits of the E-Aircraft Systems House collaboration with Siemens, will pave the way to a hybrid single-aisle commercial aircraft that is safe, efficient, and cost-effective. We see hybrid-electric propulsion as a compelling technology for the future of aviation.”

“The E-Fan X enables us to build on our wealth of electrical expertise to revolutionise flight and welcome in the third generation of aviation. This is an exciting time for us as this technological advancement will result in Rolls-Royce creating the world’s most powerful flying generator.”

“Siemens has been driving innovation in core technology fields at full speed. In April 2016 we opened a new chapter in electric-mobility with the collaboration with Airbus. Building up electric propulsion for aircraft, we are creating new perspectives for our company and also for our customers and society. With the E-Fan X partnership, we now take the next step to demonstrate the technology in the air.”