If Tesla Can Achieve Specs And Price, The Tesla Semi Will Eclipse Diesel 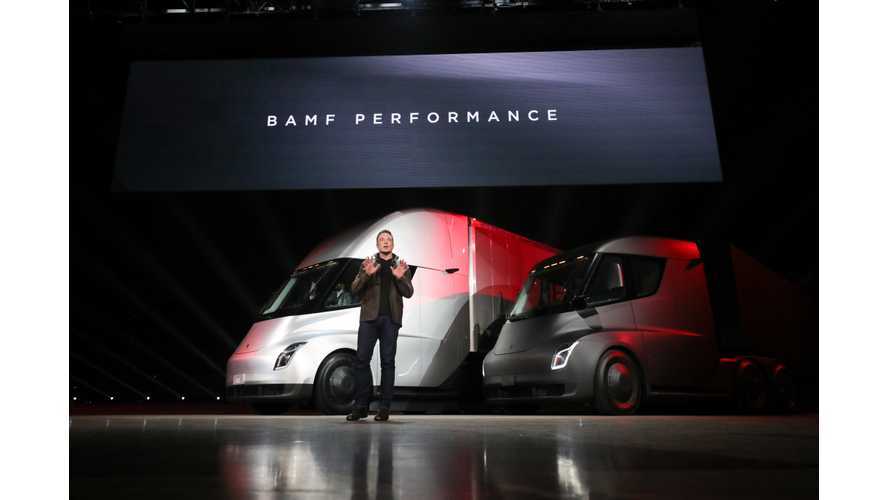 IF TESLA SEMI NUMBERS WORK, THE DIESEL TRUCK IS TOAST

As industries go, trucking is a monster. It directly contributes about 5 percent of the United States’ gross domestic product, and its critical support role for other businesses makes its economic influence even greater than that number indicates. “If you bought it, a truck brought it,” as the saying goes. In the US alone, over 7 million people work in the industry - 6% of the entire working population. Trucks haul approximately 70% of the US’s freight, burning 54 billion gallons of fuel each year to do so.

If Tesla can deliver its new Semi at anything near the specs and prices it has announced, this all-pervasive industry will face total disruption. We’re talking typewriters, folks. The cost savings of the Tesla Semi will give companies that deploy it such a competitive edge that the entire industry will have no choice but to quickly follow suit, even if it means ditching their diesel rigs before the end of their planned lives. Of course, supply bottlenecks are likely to slow the transition, but once electric trucks start to prove themselves on the highways, the demise of diesel will be only a matter of time.

If this is such a no-brainer, why do diesel trucks still rule the roads? Several builders have e-trucks in development, including startup Nikola Motors and industry veterans Daimler and Cummins. With such a rich prize at stake, why aren’t they putting the pedal to the metal? Where are the pre-orders for their trucks? The answer, of course, has something to do with vision and audacity, but there’s also a practical aspect: until now, no one in the industry has even dreamed of the kind of numbers that Tesla has thrown out there.

Those numbers are so impressive that even reliably pro-Tesla media outlets (like the one you’re reading) are expressing some skepticism (and the not-a-fan pundits are hooting with derision). Tesla says a Semi with a 300-mile range is expected to sell for $150,000, while a 500-mile model will be priced at $180,000. According to an analysis by The Verge, a comparable diesel-powered semi goes for around $120,000, and burns about $70,000 worth of diesel fuel per year, costing about 54 cents per mile. The Tesla Semi will cost about 26 cents per mile (based on US average electricity costs). According to Tesla, the savings on fuel alone should amount to $200,000 over the truck’s million-mile expected lifetime.

Above: The Street sits down with Walmart's CEO, Doug McMillon, to discuss the company's recent order for 15 copies of  the Tesla Semi (Source: The Street)

Other e-truck builders are far more conservative in their expectations, and most expect to focus first on short-haul routes. Julie Ferber, Executive Director of Electrification at Cummins, said the company’s Aeos prototype was designed for a 100-mile-a-day duty cycle. “Long haul is not ready for electrification yet,” she said. “Our calculations are that it would take something like 19,000 pounds of batteries to do 600 miles on a single charge. And from a cost and a weight perspective, that does not make sense.”

Tesla’s claims are far more ambitious, leading to the inevitable question: How in the world do they expect to build the Semi’s massive battery pack so cheaply? After all, 150 grand is only twice the price of a base Model S, and the Semi’s pack will surely need to be at least 8 times larger.

Electrek’s Fred Lambert predicts that the Tesla Semi will have a 1 MWh battery pack, and prior to Tesla’s eye-opening announcement he was expecting the truck to cost around $250,000. Lambert speculates that Tesla must have some new battery technology or other tricks up its sleeve to be able to deliver at the stated price. “I don’t see any other way that they can achieve anything close to what they are claiming,” he writes.

He isn’t the only one. Observers across the media spectrum have been scratching their heads at Tesla’s too-good-to-be-true prices. There would seem to be only two ways Tesla can deliver these numbers: EVangelists are forced to conclude that the secretive company is much closer to the long-sought $100/kWh battery cost tipping point than it has let on up until now; on the other hand, some EV skeptics are convinced that Tesla plans to sell the new truck at a loss (!).

Of course, even if the disruptive Californians can deliver the promised numbers, there are several challenges to be met before diesel rigs start disappearing from the roads. Downtime is cash money in trucking, so building out the as-yet-theoretical Megacharger network will be critical. And no matter how good a financial deal Tesla is able to offer, the Semi may have to prove its reliability on the roads for a couple of years before large-scale orders start to materialize.

Once those pieces of the puzzle are in place however, the stage will be set for a major transformation of the freight-hauling industry - and by extension, the entire world economy. And we haven’t even mentioned Tesla’s plans for platooning and autonomous driving yet...