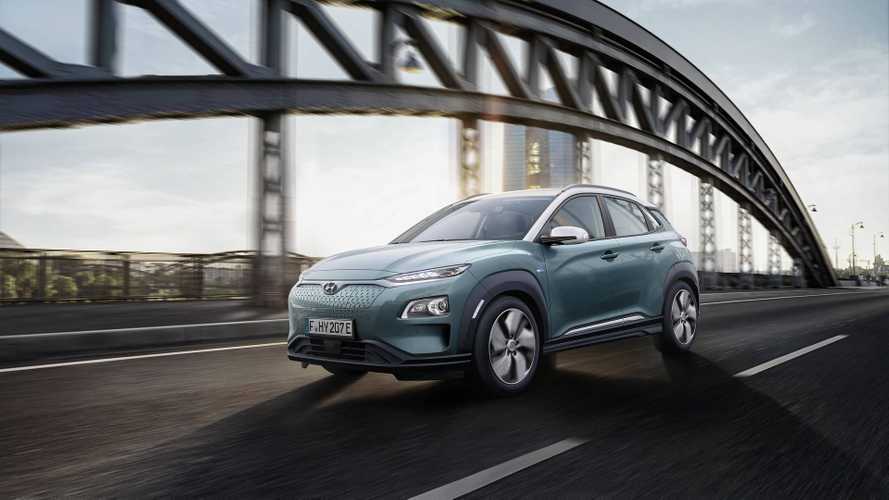 The range-topping version features a 64-kWh battery pack that provides 292 miles of range.

Keeping the funky looks while ditching the combustion engine, the Kona Electric is ready to bank on the growing demand for crossovers in a zero-emissions package. In an attempt to cater a wider audience and attract more customers, Hyundai has developed two types of powertrains, with different outputs, ranges, and of course, prices.

The entry-level Kona Electric features an electric motor good for 133 horsepower (99 kilowatts) and an instant torque of 291 pound-feet (395 Newton-meters). It comes with a 39.2-kWh battery pack with enough juice for a maximum range of 300 kilometers (186 miles) in the new Worldwide harmonized Light vehicles Test Procedure (WLTP), which is widely considered as being significantly more relevant than the outgoing New European Driving Cycle (NEDC).

Step up to the range-topping Kona Electric and Hyundai will reward you with 201 hp (150 kW) and the same amount of torque as the base model. Thanks to its much bigger 64-kWh battery, the electric crossover will have a range of up to 470 km (292 miles) as per WLTP.

Once the battery is depleted, it will take around 6 hours and 10 minutes to fully recharge the 39.2-kWh pack whereas the larger 64-kWh pack will need roughly 9 hours and 40 minutes. Thankfully, Hyundai has implemented a quick-charge facility for those in a hurry. Using the 100-kW DC fast charger, both flavors of the Kona Electric will “fill up” the batteries to an 80-percent level in just 54 minutes.

As far as performance is concerned, the base Kona Electric does the sprint to 62 mph (100 kph) in a decent 9.3 seconds. The beefier version completes the same task in 7.6 seconds, so it’s almost like a hot hatch. Both top out at 104 mph (167 kph).

If you’re worried the battery pack will eat into the available room inside, Hyundai mentions the Kona’s all-new platform has allowed the engineers to neatly integrate the battery packs without having a negative impact on cabin space. Without the charging cable, the trunk can swallow up to 373 liters of storage, while with the charging cable the number decreases to 332.

The styling has been largely carried over from the conventionally powered model, but there are a few subtle changes such as the exclusive 17-inch alloy wheels and the closed-off front grille. Hyundai has also tweaked the front bumper to make it more aerodynamic by implementing lateral air curtains to reduce turbulences in the wheel arch area. Silver side sills are also a telltale sign it’s the fully electric Kona, as is the roof-mounted spoiler mildly modified to further boost aero.

Inside the cabin, we notice the fully digital seven-inch instrument cluster and power front seats with 8-way adjustment as well as heating and ventilation functions. The driver’s seat comes with an extra 2-way electric lumbar support to find the ideal position behind the wheel, which can be optionally heated.

Hyundai will have the new Kona Electric - aka world's first fully electric subcompact crossover - on display at the Geneva Motor Show beginning March 6.

According to some sources, the Kona Electric will land in the United States in the first half of 2019, carrying a base price of just under $40,000. It will be offered with only one battery option in the U.S., the larger 64-kWh one.