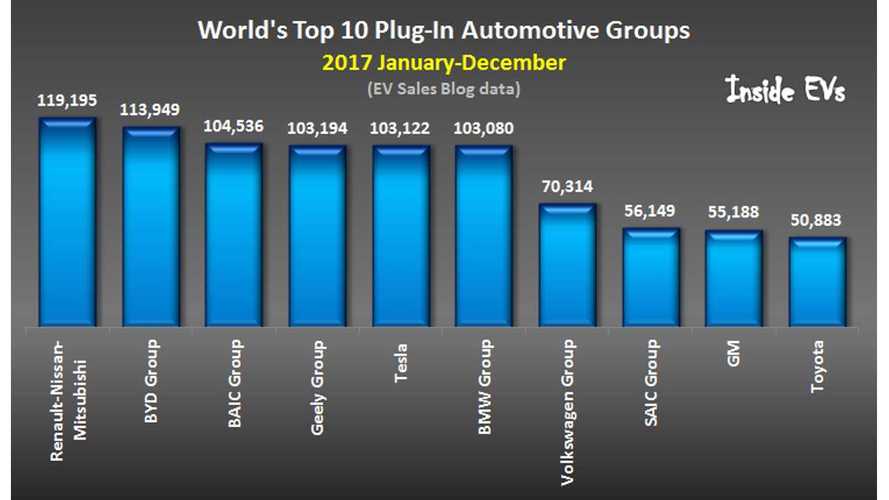 If you wondered which automotive group was the biggest manufacturer of plug-in electric cars, then here's a look at the top 10 rank for 2017.

Last year, some 1,224,000 plug-in electric cars were sold around the world and we already examined the rank for brands.

The rank for the OEMs (some with several brands under one umbrella) is a little bit different though.

In the #1 spot we see the Renault-Nissan-Mitsubishi Alliance with 119,195 sales. The alliance achieved the highest result thanks to inclusion of Mitsubishi, although overall differences in the top six are relatively small.

The new LEAF probably will enable high growth for Renault-Nissan-Mitsubishi in 2018.

Tesla barely catches the top five with 103,122. This year, everything depends on the Model 3, which opens the door for Tesla to become #1 if the production ramp-up accelerates.

EV Sales Blog said that GM's #9 is the result of poor management.

"By concentrating their efforts in North America, they are letting go of the two largest engines of growth, the first is by far China, where they have two models (Buick Velite/Volt & Cadillac CT6 PHEV) with the wrong kind of technology (China is BEV-friendly), both selling poorly, while they have a possible winner (Bolt) still slowly ramping up production in their US factory after more than a year on the market. Which leads us to to the Second Engine of growth (Europe), where GM was greedy while negotiating  the Opel sell to PSA, effectively ending the Ampera-e (Bolt) career in Europe. Actually, the current GM management is akin to the current USA goverment: "America First". The problem for them, is that the America global relevance is getting smaller and smaller every passing day and the world will go on, regardless of what happens there. (And why did i remembered the UK's Brexit?) "