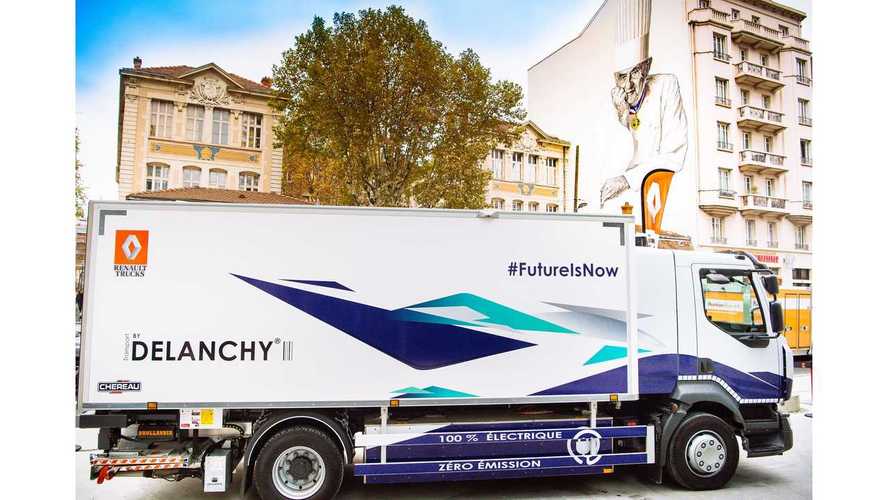 Renault Trucks has delivered a very special truck for the Delanchy Transport Group in Lyon, France. It's not only all-electric, but is equipped with a refrigerated box powered by traction battery.

Preparing for the future of urban freight transport together, Renault Trucks and Groupe Delanchy have developed an all-electric truck equipped with a refrigerated box for delivering fresh produce.

It's unclear exactly what Renault Trucks' future intentions are. The automaker has initiated several similar pilot projects in the past. Hopefully, this will pave the way for series production of its electric trucks in the future.

According to the press release:

"Today, in relation to electromobility, they have jointly developed this 100% electric experimental vehicle. It is equipped with a Chereau temperature-controlled box and a Carrier refrigeration unit, fully powered by the vehicle's traction batteries: a first on this type of truck.

Although being an experimental vehicle, this 13-tonne electric truck will be used under real operating conditions in Lyon, the historic birthplace of Renault Trucks. This city has also played an important part in Groupe Delanchy’s history: with the introduction of its first route in 1968, fresh produce could to be transported from Lorient to Lyon in less than 24 hours.

On a daily basis, the 100% electric Renault Trucks D will leave Groupe Delanchy's distribution hub in Corbas, in the suburbs of Lyon, to deliver seafood and fresh produce from Lorient to Les Halles de Lyon Paul Bocuse.

This zero-emission truck is the ideal solution for maintaining air quality and reducing congestion in the city centre, because it allows noise-free deliveries to be made during anti-social hours, maintaining peace and quiet for residents. Because it produces no polluting emissions, this vehicle also helps maintain the area in which the operatives are working, the unloading dock at the Halles de Lyon, which is a confined space in the basement."

“We are very pleased, in more ways than one, with the arrival of this new 100% electric truck. As part of our long-standing partnership with Renault Trucks, of course, but also in the commitment we have made to our customers, our employees and, more broadly, for future generations. This ‘zero-emission’ truck is a first step towards new technologies that are evolving very rapidly. We will evolve with them, as we have always done."

"This partnership illustrates the robustness of the relationship we have with our customers. The inclusion of this vehicle in Groupe Delanchy’s logistics plan perfectly illustrates our vision for road freight transport, namely a high-performance diesel vehicle for long distance transport and a zero-emission vehicle to cover the final kilometres."

"The Lyon metropolitan area supports and encourages all initiatives that seek to improve the quality of urban logistics, which lies at the heart of major challenges for the metropolitan area of Lyon, including businesses that depend on it, air quality and environmental noise, CO2 emissions, and traffic flow in the city centre. The community is also the first to have adopted a framework for deliberation that establishes a genuine public policy in favour of urban logistics.”

"Renault Trucks is a pioneer and has a century of experience in electro-mobility. The manufacturer is developing and testing several types of technologies in real operating conditions in collaborations with its customers.

Hybrid technologies and 100% electric have been integrated to several types of vehicles: from 3.5 tons up to 16 tons.

Our ambition is to prepare zero-emission solutions, profitable for our customers, by 2020."

Check out this brief video about Renault Trucks' history of electrification: