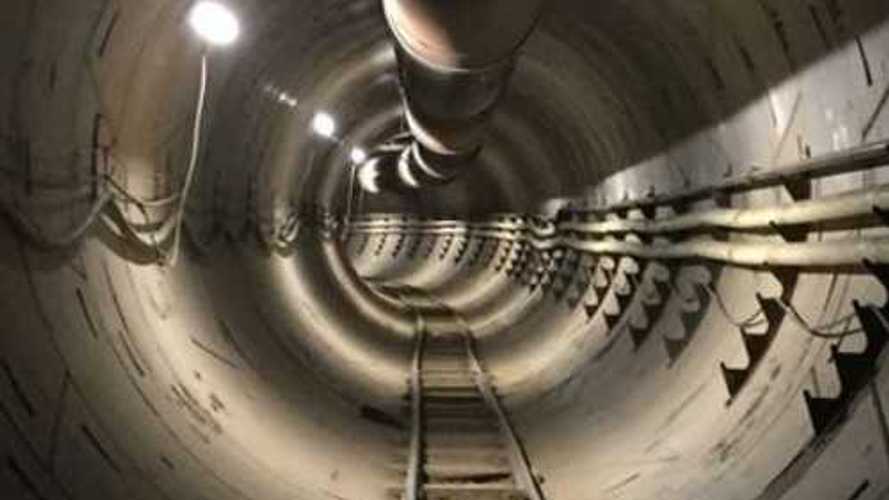 The whole point of Musk's Boring Company came about due to his beef with California traffic. We're not really sure there's anyone that isn't frustrated by road congestion and traffic jams, and Musk hopes to alleviate the problem. Since the company initially surfaced with the teaser video of its eventual grand plans, it seems the end-goal now isn't as concrete. There has been recent talk about a hyperloop application, among other concepts.

Thus far, the tunnel has proceeded from the SpaceX parking lot in Hawthorne, California, toward the Los Angeles International Airport (LAX). Current work is focused on a two-mile segment. Next, the company plans to dig a parallel alternative to the gridlocked 405 freeway. However, this venture has yet to be approved. The Boring Company has already submitted a permit request to dig into Los Angeles and eventually link the South Bay, Westside, and San Fernando Valley.

Though this information has yet to be officially confirmed, Musk' earlier Tweet speaks to the goal of extending the tunnel from the LAX to the 101, which would include the above-referenced route. LA Mayor Eric Garcetti seems to be on board with the project as a whole.

L.A. has always been a place where innovators come to build new ideas that can change our lives. Looking forward to exploring how @ElonMusk’s Boring Company could help us build a better future for our city. https://t.co/doolkpsuZw pic.twitter.com/om7nWEmteD

The Boring Company already has full-fledged support from the Hawthorne city council, as well as city mayor, Alex Vargas. This doesn't come as much of a surprise due to the support of SpaceX in the area. The location has served as the primary pilot for the project and will be the initial testing site. Vargas shared:

“The city of Hawthorne is excited to see the rapid progress at which the tunnel is being completed. We are looking forward to seeing Elon Musk begin testing his system and making subterranean travel a reality here in our city.”

The company has also started a second project on the East Coast, which will eventually connect Baltimore and Washington D.C. According to The Boring Company:

“To alleviate traffic, transportation corridors, like the buildings that feed into them, must expand into three dimensions. One option is to ‘go up’ with flying cars. The other option is to 'go down' and build tunnels. There is no practical limit to how many layers of tunnels can be built, so any level of traffic can be addressed.”

Musk is currently fundraising for the projects by selling hats (above), and it's going surprisingly well.