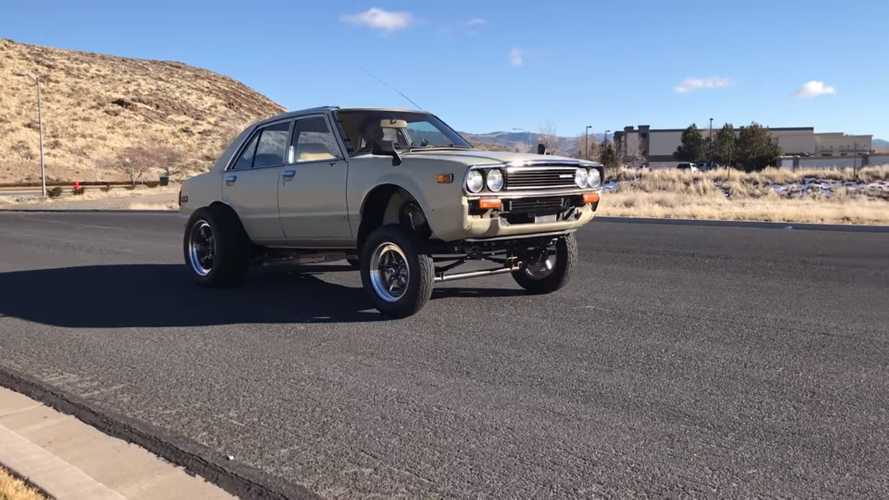 Chevy Volt Battery in the mix too!

We've seen any number of EV conversions over the years — cars that have had their internal combustion guts ripped out and replaced with quiet, powerful electric drivetrains — and among that number there have been a few, how shall we say, "Frankensteins" among them. This little battery-powered monster that just showed up on Youtube, however, probably out-Frankensteins them all.

The 10-second clip reveals a first-generation Honda Accord with what is said to be a Tesla rear axle, complete with powerful electric motor and controller, stuffed, mostly, beneath it. The axles have apparently not been cut to fit the much smaller chassis of the import that originally came to these shores in 1981, and so the wide rear tires stick out well past the body work. To add to the weirdness, the front end is jacked way up in the air, underpinned by a set of skinny tires.

Affectionately and appropriately named "Teslonda," this little freak does zero-to-sixty in 2.7 seconds, nosing the front end even higher into the air as it does. According to the poster of the video, the blip of action was recorded in temperatures of 38 degrees F (3.3 degrees Celsius), and so they expect they can get it down to 2.5 seconds.

While the whirring bits came from a Tesla Model S, sourced from Jason Hughes' HSR Motors, the battery is actually from a Chevy Volt. We've included a video of it powering up the drivetrain for the first time below. Inside, the dash display is a custom affair, a short video of which we've also embedded below, along with a picture of the underside as it sits on a lift having its battery pack fuses upgraded to handle 1,200 amps.

If the brief clip is far too brief for your tastes, you're in luck. The "Jimmy Built" YouTube channel should have a longer, more thorough video of the car in the coming weeks. We'll be sure to bring it to your attention when that happens, along with anymore released information.