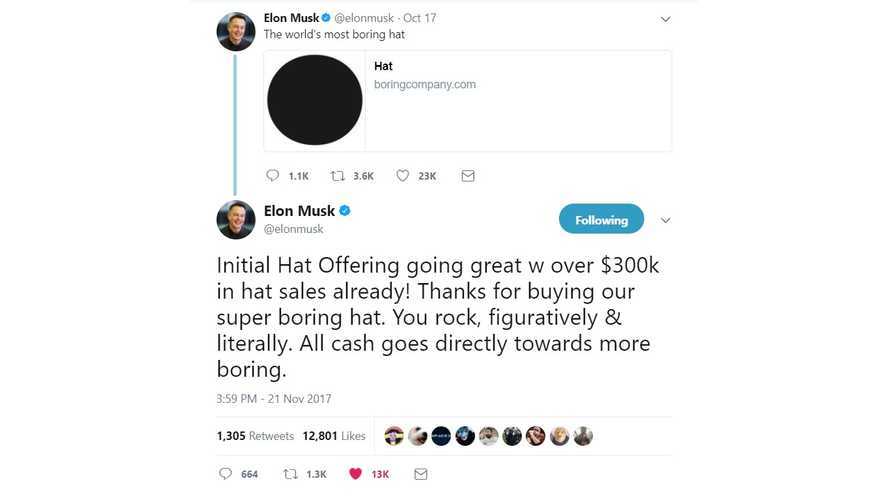 A little more than a month ago, entrepreneur Elon Musk took to Twitter to flog a simple baseball cap bearing the logo of his tunneling venture, The Boring Company. Success was swift, with Musk returning to the microblogging site a day later to boast about 4,000 unit sales, followed by another post a couple of days after that to trumpet passing the 6,400-hat mile marker.

Spotted: a pair of Semi hats hanging out in the cab of the truck.

Fast forward to the present and Musk is once again shilling his chapeau, tweeting that they've brought in over $300,000 from Boring Company hat sales. He also managed to squeeze a Dad-like pun (or two) in there. After consulting with our calculators, we reckon that's about 15,000 hats.

While that's not an earth-shaking number, and probably a drop in the tunnel-funding bucket, it's also nothing to sneeze at. You could probably buy a fully loaded, Founder's Edition Roadster with that kind of cash. Or, maybe pay for 100 further feet of tunnel.

While Musk explains that this "Initial Hat Offering" is going toward the boring-beneath-LA effort, we can't help but wonder whether he will use this hat-selling approach to help fund a certain Tesla product, namely the Semi. We only mention this because we noticed a pair of hats in the cab of the all-electric hauler featuring a head on view of the truck and, well, Christmas is coming.

We reckon that, with the design already taken care of, and a relationship with a hat supplier already established, all that's needed to make the money pour in is a few Tweets from the Musk account, which, when last we checked (just now), has 15.2 million followers. If each of those fans bought a hat — let's see, take the root of the circumference of a large redwood, divide by pi, subtract 37 and voila! — $304,000,000 would rain down, which is enough for a decent down payment on a new Semi factory.

Come to think of it, perhaps InsideEVs could follow this same funding method to send its weary writers on a well-deserved vacation to Hawaii, or someplace. Hey, Boss ...