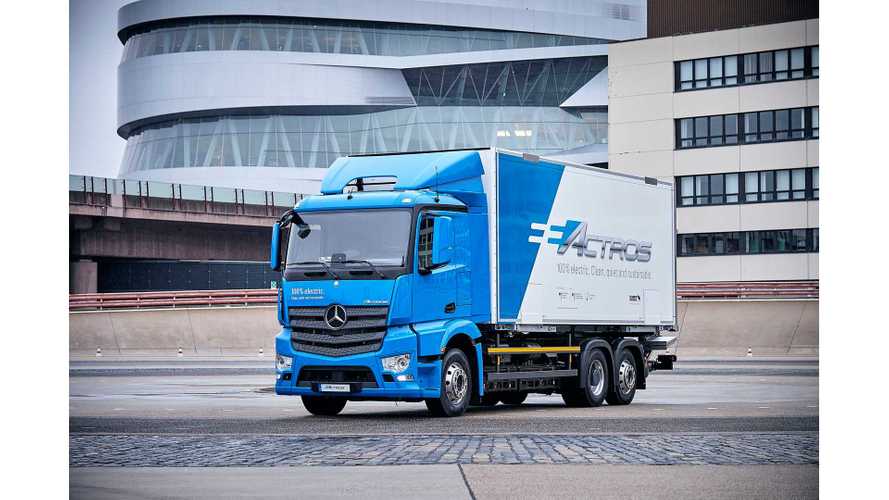 Mercedes-Benz Trucks boasts that it has become the first manufacturer in the world with a heavy-duty electric truck by introducing the Mercedes-Benz eActros.

The German manufacturer converted the Actros, using experience from the Mercedes-Benz Urban eTruck prototype from 2016.

Charging time was stated only for mobile CCS Combo chargers at depots - at 80 kW it takes three hours (at least 11 hours at 20 kW).

The Mercedes-Benz eActros will be made in two versions with gross vehicle weight of 18 or 25 tonnes.

In the coming weeks, Daimler intends to deliver 10 units for 24 month trials in customers hands in Germany and Switzerland.

If tests are successful, series production could begin in 2021.

All-electric Mercedes-Benz trucks for the heavy-duty distribution sector: Sustainable, fully electric and quiet: Mercedes-Benz eActros to roll out to customers in 2018

Stuttgart – In 2016 Mercedes-Benz Trucks became the first manufacturer in the world with a heavy-duty electric truck. The technology pioneer is now taking the logical next step: putting its electric truck, the eActros, out on the road with customers. Ten vehicles in two variants, with a gross vehicle weight of 18 or 25 tonnes, will be handed over in the next few weeks to customers, who will be testing their everyday feasibility and economic efficiency under real-life conditions. The long-term aim: locally emission-free and quiet driving in urban environments with series-production trucks.

At the IAA Commercial Vehicles show in Hanover, back in 2016, Mercedes-Benz displayed its concept for a heavy-duty electric distribution truck for urban areas. The feedback to the technical feasibility of building such a vehicle was positive across the board – from the general public, politicians and customers. In Germany alone, around 150 very serious enquiries were received. Using expertise from across the whole Daimler Group, an interdisciplinary team from Daimler Trucks has designed a vehicle capable of coping with everyday distribution operations, a small number of which are due to be handed over to customers very soon. A number of technical and, above all, business-related issues remain outstanding, key among them the range and cost of the batteries, but also the infrastructure required for their use as part of customers' commercial fleets.

"Daimler Trucks is synonymous with innovation leadership, allied to a realistic and pragmatic attitude. This is particularly true when it comes to electric mobility. We now want to work together with our customers to move swiftly forward with the development of our Mercedes-Benz eActros to the point where it becomes a viable proposition in tough everyday operations - both technically and commercially. We are beginning this process by creating an innovation fleet and will be supporting its testing in the day-to day logistics environment of our customers. This will enable us to establish just what remains to be done, in terms of technical matters, infrastructure and service, to make our Mercedes-Benz eActros competitive", explains Martin Daum, the Daimler AG Board Member responsible for Daimler Trucks and Buses.

"We are now passing both two- and three-axle variants of our heavy-duty electric truck, the Mercedes-Benz eActros, into the hands of customers. Initially the focus will be on inner-city goods transport and delivery services – the ranges required here are well within the scope of our Mercedes-Benz eActros", adds Stefan Buchner, Head of Mercedes-Benz Trucks.

"We have developed a vehicle that has been configured from the outset for electric mobility. Compared with our prototype, quite a few technical changes have been made: the power supply is now ensured by eleven battery packs in all – and wherever possible we have used already proven components that are ready, or very close to ready, for use in series production", says Stefan Buchner, Head of Mercedes-Benz Trucks. Participating in the fleet test are ten customers from a variety of sectors in Germany and Switzerland. The companies are:

These customers all distribute goods via the road network – but in very different sectors and categories. The palette ranges from groceries to building supplies and raw materials. The vehicles are being used by customers for tasks that would otherwise be completed by vehicles with conventional diesel engines. The range of requirements means that the vehicles are fitted with a variety of bodies. According to need, refrigerated box bodies, tankers or tarpaulin sides are used. The drivers of the eActros are trained specially to work with the vehicle. The pilot customers will be testing the vehicles in real-life operations for twelve months, after which the trucks will be going out to a second round of customers for a further twelve months. "This will enable us to satisfy the many requests we have had from customers and to gain even more insight", according to Stefan Buchner. "Our aim is to achieve series-production and market maturity for a range of economically competitive electric trucks for use in heavy-duty transport operations with effect from 2021."

The basis for the eActros is provided by the frame of the Actros. Otherwise, however, the vehicle architecture has been configured specifically for an electric drive system, with a high proportion of specific components. The drive axle, for example, is based on the ZF AVE 130 that has already proved its worth as a low-floor portal axle in hybrid and fuel-cell buses from Mercedes-Benz and is now being fundamentally revised for the eActros. The axle housing has been completely redesigned and is mounted in a significantly higher position, thereby increasing the ground clearance to more than 200 mm. The drive system comprises two electric motors located close to the rear-axle wheel hubs. These three-phase asynchronous motors are liquid-cooled and operate with a nominal voltage of 400 volts. They generate an output of 125 kW each, with maximum torque of 485 Nm each. The gearing ratios convert this into 11 000 Nm each, resulting in driving performance on a par with that of a diesel truck.

The maximum permissible axle load stands at the usual 11.5 tonnes. The energy for a range of up to 200 km is provided by two lithium-ion batteries with an output of 240 kWh. These have already proved their worth in service with EvoBus GmbH – so can no longer be considered as prototypes. "Synergies within the Group like these allow us to pool our experiences, shorten development times and, of course, also save costs", according to Stefan Buchner.

The batteries are accommodated in eleven packs, all in all: three of these are located in the frame area, the other eight are to be found underneath. For safety reasons, the battery packs are protected by steel housings. In the event of a collision, the mountings give way and deform, so diverting the energy past the batteries without damaging them. The high-voltage batteries do not just supply energy to the drive system, but to the vehicle as a whole. Ancillary components such as the air compressor for the braking system, the power steering pump, the compressor for the cab air-conditioning system and, where relevant, the refrigerated body, are also all electrically powered. Discharged batteries can be fully recharged within three to eleven hours, assuming a realistic charging capacity of 20 to 80 kW from a mobile charging device at a fleet depot. The charging standard used is the Combined Charging System, CCS. The LV on-board network made up of two conventional 12-volt batteries is charged from the high-voltage batteries via a DC-DC converter. This ensures that all relevant vehicle functions such as lights, indicators, brakes, air suspension systems and cab systems remain operational in the event of the high-voltage network failing or being switched off. The high-voltage network can only be activated if both LV (low-voltage) batteries are charged.

The development and testing of the heavy-duty electric trucks in distribution transport forms part of the project "Concept ELV²", which is funded to varying extents by Germany's Federal Ministry for the Environment (BMUB) and Federal Ministry of Economic Affairs and Energy (BMWi) to the tune of around ten million euros altogether. Areas covered by the funding plan include the investigation of the complex challenges involved in the development, assembly and operation of electric trucks. These include the use of high voltages (> 400 V), high currents (up to 1000 A), battery technology (price, weight, durability, service life, charging time), range and energy requirements, charging infrastructure and logistics concepts, safety requirements, summer and winter viability as well as questions about customer acceptance of the trucks.

The customer innovation fleet will be on the road until at least mid 2020. Its aim is to establish the energy requirements for a series of specific application scenarios as well as the economic efficiency of the electric trucks, and to compare the environmental performance of the electric trucks with that of diesel trucks in a full Life Cycle Assessment. The findings of this research work will find their way back into the vehicles in the form of on-going optimisation measures. The results will be published, giving potential users the opportunity to optimise their route planning or to develop new business models for their logistics processes.

Blazing the trail for all-electric light-duty trucks is the eCanter from the company's Asian brand FUSO, which launched last autumn as the first series-production electric truck. The eVito from Mercedes-Benz has also been available to order since November 2017 and will be going out to customers from the second half of this year. Next in line are the all-electric Citaro city bus and the eSprinter. As you can see, the vehicles from Daimler Trucks, Daimler Buses and Mercedes-Benz Vans thus ensure that every aspect of inner-city transport is catered for with electric vehicles. Along with payload and load capacity, the key factors that are in demand here are sustainability and noise reduction. And it is here, where frequent stopping, braking and acceleration are the norm, that the advantages of battery-electric drive technology truly come into their own. The city's residents benefit from cleaner air and less noise, while – as another advantage – electric trucks are by and large unaffected by access