We Check Out The Arcimoto Electric 3-Wheeler 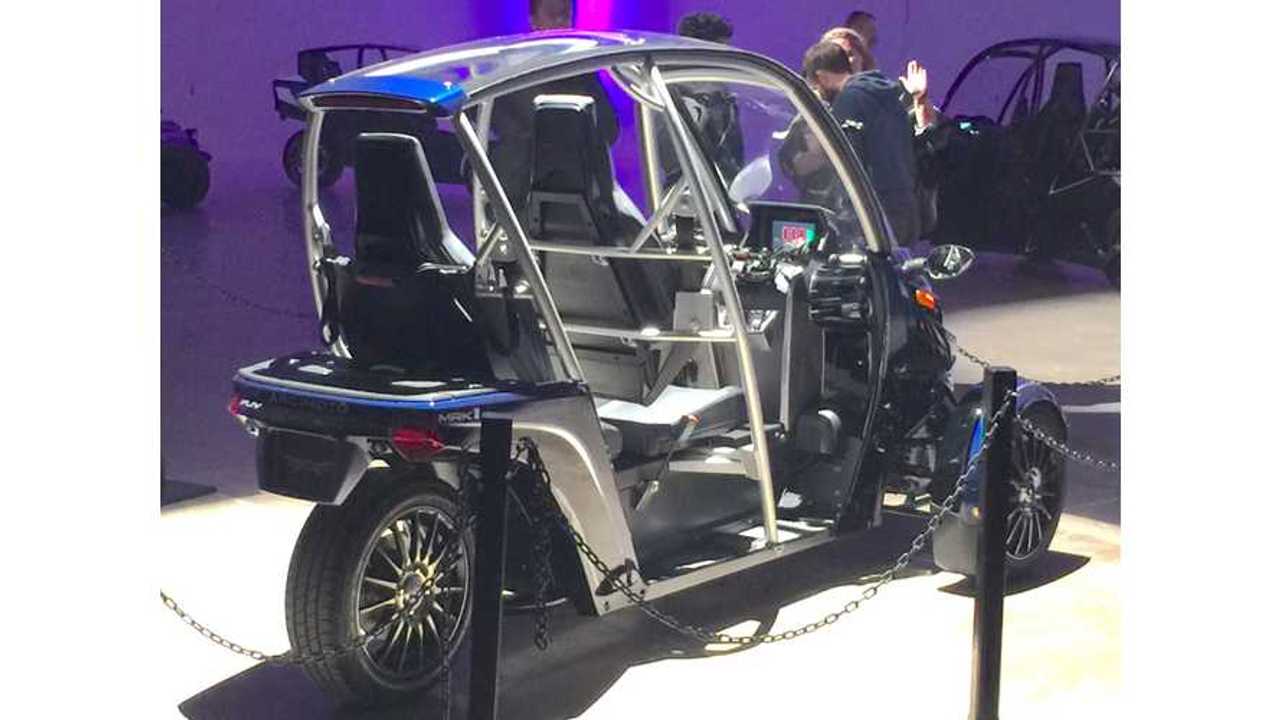 The Arcimoto FUV: First Delivery Of A Production Vehicle.

Julie and I took a road trip to Eugene Oregon to attend the November 11th opening of the AMP. (Arcimoto Manufacturing Plant) 700 enthusiast attended and saw many millions of dollars of new manufacturing equipment that arrived earlier in the week  and the first Signature Series retail FUV delivered.  With all the Tesla truck news on the heavier side of the EV space, I thought I would "weigh" in with my observation on the lighter side of the EV space with the "Uber" Fun Arcimoto FUV.

We’re together in a once in a lifetime change from gasoline & diesel to electricity.

According to the 2010 US Census, 80.7% of the U.S. population now lives in urban areas. The Arcimoto FUV architecture is a completely new class of vehicle that slots in at 1000 lbs, squarely between a 300 lbs. motorcycle and a 3000 lbs. car and it is ideal for those of us living in urban areas.

The FUV is also a crazy fun open air drive for two, cruising around in the city without the need for a helmet in many states including California. Yes there are cabin enclosures, but that's a buzz kill from a So-Cal perspective.

I’ve experienced the fun of driving around in a preproduction SRK  (now known as the FUV) last year for a few days.  With the Reg A capitol raise followed by the listing on Nasdaq, the opening of its manufacturing plant, the delivery of its first retail production signature vehicle, an early to mid 2018 schedule for a pilot fleet of 50 FUV's followed by scale retail production later in 2018 it's been a very successful and productive year for the Eugene Oregon company.

(FUV) is the name of the vehicle as well as the Nasdaq stock ticker for Arcimoto. Fun is also one of the best features of the Arcimoto FUV in my view.

Beginning in 2007, I drove a GEM E4 neighborhood electric vehicle around North San Diego County for three years. Although I’ve had many great cars in my 37 years of driving, the Gem E4 was unique and unparalleled in its “fun factor” being open, light, electric, and so easy to jump in and out of while tooling around the city. Hard to explain if you have not driven one but we felt like we were at a resort when we would go out for dinner or around town in the Gem E4. The downside was its lead acid batteries, range of just 15 miles or so in our hilly area and the speed which was limited to 25mph and use only on roads posted at 35 mph or less.

Still, the essence and memory of that fun open-air experience tooling around our city is one that my wife and I miss greatly. Enter the Arcimoto FUV. With the open air “fun factor” that we miss, the Arcimoto FUV will be our personal choice as our next vehicle.

It's seriously time to take a hard look at the Arcimoto FUV.

In San Diego, a $12k Arcimoto FUV driving the same distance uses 1700 kwh of electricity a year at an average cost of $323 a year, with emissions of 935 lbs of CO2e using grid electricity, zero emissions when charged by solar PV.**

Both cost and emissions are equally important to us as we strive to improve our family budgets and our air quality. If you have a large family or need a big SUV, certainly choose one, but its easy to see the huge savings in the cost of owning and running an Arcimoto FUV.

The key question: Would you drive one?

You can put my wife and I squarely in that camp as neither one of us would ever drive a motorcycle.  Both of us however, would drive and are enthusiastic about the Arcimoto FUV.  That's a financially wonderful equation for Arcimoto if we are in the statistical norm and not the exception.

In our view it's much safer than a traditional motorcycle with its tall visible profile,  twin headlights, seatbelt's, car like seats, roll cage, no lane splitting capabilities and stable three wheel platform.

We're also walkers and bicycle riders, and we know we don't stand a chance if crashed into by 4000 lbs of metal, yet we choose to share the road with cars when walking or biking on our city streets.

So visualize the motorcycle and scooter market now at 3% and all the players in that limited market segment. Now imagine a market for the Arcimoto FUV of 10%, 25%, 50% or greater.  You can easily see the value of the Arcimoto FUV if a greater degree of drivers find the Arcimoto's configuration viable as compared to motorcycles and scooters.  The Arcimoto FUV is not a car, it's not trying to be car, it doesn't have to be, and it shouldn't be.

Check out the footage of the folding rear seat of the Arcimoto FUV in the video linked here and the company at www.arcimoto.com for more information, configurations and options.

Tell us what you think. Would you drive one?

*Gas calculations are done at 24 pounds of emission for a gallon of gasoline per the Union of Concerned Scientists.

**Electric calculations use 143 watts per mile for the Arcimoto FUV and 550lbs of emissions per MWH of electricity in the SDG&E service area.

Our thanks to Peder Norby for this guest contribution. Check out his blog here.